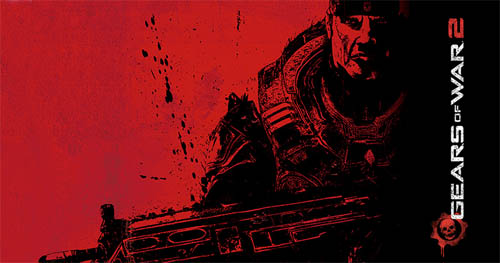 It's time to stock up on chainsaw grease.  Gas up your buddy's lancer because Gears of War 2 launches this Friday, November 7th, and Co-Optimus is going to be your prime source for all the co-op info you can get your bloody little hands on.  Keep an eye on this page tomorrow for some really good stuff.

Above and beyond our co-op coverage, there's tons of places to get your Gears fix.  You've got the official 60 second commercial debuting tonight during Monday Night football.  You've got specials on G4TV, Sci-Fi and Spike TV.

There's also some great contests coming up (hint), not only here but other places around the web including some from Microsoft and Epic.  There's going to be a leaderboard tournament to show off your lancer skills, and you'll be able to game with developers as well.

Want the full scoop?  Read on.

Catch all the glory as “Gears of War 2” hits the airwaves during launch week. Tune in or set your DVR to be part of the excitement leading up to the worldwide launch of “Gears of War 2” on Nov. 7. Don’t miss out on the must-see TV:

•        G4 TV takes X-Play on location to Epic Games in Cary, NC for a behind-the-scenes look at the blockbuster sequel, and will officially premiere the opening cinematic of “Gears of War 2” in full HD glory. The “Gears of War 2” X-Play episode debuts on Monday, Nov. 3 at 5 p.m. PT and re-airs each night throughout the week exclusively on G4 TV.

Still not enough “Gears” activity? Beginning Friday, Nov. 7 at 12:01 a.m. and continuing through Sunday, Nov. 9 at 11:59 p.m. ET, “Gears of War 2” LIVE Weekend Assault, brought to you by Transporter 3, will take over Xbox LIVE, delivering the premium “Gears of War 2” experience. Eager fans can jump onto Xbox LIVE on launch day to get into the following action:

All weekend long, battle it out on Xbox LIVE for your chance to score one of the following coveted prizes:

Take on your favorite Epic Games developers over Xbox LIVE on Saturday, Nov. 8 from 2 p.m. – 5 p.m. ET. Look for these gamertags and send off a game invite:

Last but not least, exclusive video content for all LIVE subscribers will be released all weekend long:

As an added bonus, Xbox LIVE Gold subscribers will have access to:

•        Last Day Theme – This theme, inspired by the ‘Last Day’ TV ad and optimized for the New Xbox Experience launching Nov. 19, will be available for Gold subscribers free of charge during LIVE weekend

For more information on “Gears of War 2” LIVE Weekend Assault, brought to you by Transporter 3, visit www.GearsOfWar.com.