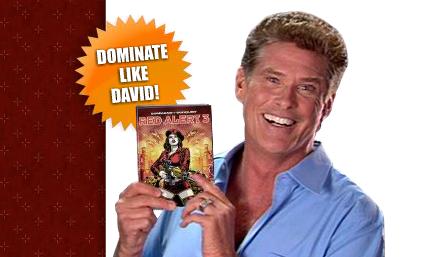 Command & Conquer: Red Alert 3 is most notable here at Co-Optimus for its tightly integrated co-op campaign, but you must admit the celebrity involvement is unique, as well.  Well known actors like Tim Curry, George Takei, and even Jenny McCarthy play characters in the game.  However, even a Playmate, Star Trek's Mr. Sulu and Rocky Horror's Dr. Frank N. Furter can't hold a candle to the incredible brilliance that is David Hasslehoff.  You heard that right, the Hoff.  He's driven a sweet talking car, jogged in slow motion on a beach, and now he's featured in an over-the-top website promoting Red Alert 3, Conquer This Life.  It's totally bizarre, done in infomercial style, and includes some hilarious bits like "Dolphin vs. Bear" and "It's Braintastic".  The site is definitely worth checking out, for the sheer crazyness factor alone.

On a more serious note, the on again, off again PS3 version of Red Alert is swinging back to the "On" end of the pendulum.  Videogamer.com reports that the extra space on the PS3's Blu-ray format will allow for some cool extras, including 1080p resolution.  The PC version of Red Alert 3 is out now, the 360 version is coming on the 14th of this month, but there is no solid release date for the PS3 version.