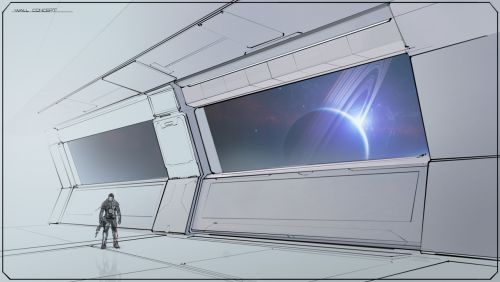 An arcade-style, first-person shooter has been revealed by the developers of the Sniper Ghost Warrior series.  City Interactive have announced Alien Fear for Xbox Live Arcade and PlayStation Network later this year.  The Unreal Engine 3 powered game will feature plenty "visceral action."

A press release from the studio had this to say.

Alien Fear is a head-long rush of adrenaline-filled, close quarter combat where players assume the role of a highly trained elite commando on a mission of sabotage.

Whether fighting across beautifully composed sci-fi vistas, or working co-operatively to buzzsaw your way through hordes of aggressive enemies, Alien Fear is a sustained burst of arcade aggression.

Other than that brief mention of co-op in the press release, not much else is known about the game.  With only a few pieces of concept art released so far, the game seems pretty early on.  As soon as we find out more details we'll get the game added to our database and bring you fine folks more detailed coverage.