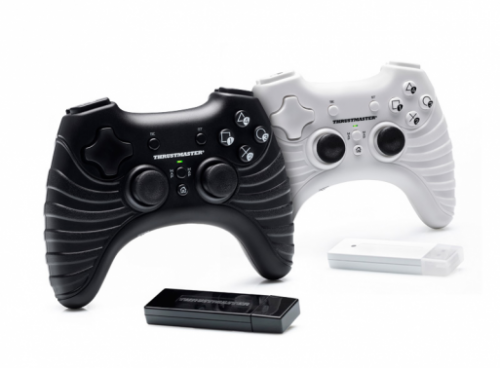 One of the biggest annoyances with couch co-op gaming is constantly trying to find that second controller.  Thrustmaster agrees, that's why they are selling new combo packs of their T-Wireless controllers for the PC and PS3.  The pair of controllers work on both systems out of the box and come in black and white colors.

Thrustmaster actually mentioned this pack aimed at co-op gamers, with each wireless controlling claiming 50 hours of battery life on three AAA batteries.  The controllers also feature "non-slip grips" - ya know - for those really intense sessions of Horde Mode in Gears of War 3 errr...Uncharted 3!  The controllers are also fully programmable for customized button mappings.

While the T-Wireless controllers sell separately for $24.99, you can get the combo pack for $44.99 when it releases in June.