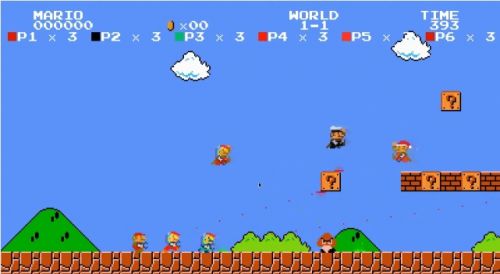 Earlier this month we told you about Mari0, a Super Mario Bros. and Portal hybrid from indie game developer Stabyourself.net. Yup, it's the old Super Mario Bros. with portal guns, user created content, a map editor, and four player local co-op. It's exactly what it sounds like. I downloaded the game here and took it for a spin. I have to say, it's a pretty good time, especially for a free download. The portals worked well and it's saturated with nostalgia.

Not only does the game support four player co-op, six player online co-op is on the way. The following video shows six customizable Marios in action. Did I mention that you can change the color of your character's clothing and portals to your liking? Well, you can. You may also choose from a wide variety of hats. What is it with gamers and digital hats? The online co-op is still a work in progress, so you'll have to bust out your gamepads and play locally, for the time being.  Mari0 is a fun distraction, and the price is right. Download it now before Nintendo or Valve squashes it!

Mari0 supports four player local co-op, and will soon support six player online co-op. It is available now for the PC, Linux, or OSX. Check out Stabyourself.net for more information.

Here's an added bonus video showing dynamic split screen. I don't think this has been implemented yet, (I couldn't get it to work on my game) but it looks promising.