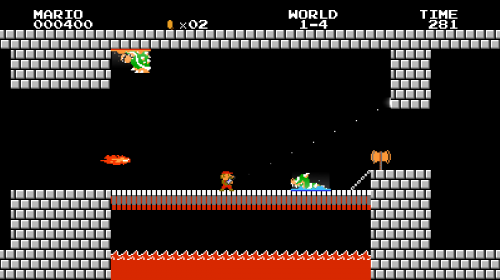 Community group known as Stabyourself.net has finally accomplished a gamer’s dream: taking two awesome games by two legendary publishers, Nintendo and Valve, and put them into one, stellar game.

In the simplest way possible, they’ve perfectly combined both the original Super Mario Bros. to that of Portal 2, giving Mario the ability to take side-scrolling platformers to a whole new level. In a sense, it’s like time doesn’t exist in this game, in that it takes one of the oldest, most beloved video games in existence and brings it forward to the 21st century.

Check out this short clip of what Stabyourself has accomplished:

Just like in Portal, you are able to fire a portal onto basically any surface and use that portal for your own benefit. Normally, Portal is a puzzle game, but in Mari0, it’s more of like a fun tool to make Super Mario Bros. revitalized. Those pesky Lakitus still annoying you? Place a portal on the ground below and watch it kill itself with its own Spinys. Can’t seem to get across a tricky gap? Use a portal to make that pitfall your bitch. Even facing off between you and the "dreaded" Bowser looks just like another Goomba encounter in this game.

And what would Super Mario Bros. be without having player 2 right alongside you? Not only does it support co-op, but up to 4 players can play online and use the Mario universe as their playground. And like in Portal 2, each player has their own designated colors for their portals so no one can get confused (not that you’ll need to strategically think about where to place them).

Linking up with friends to play the normal co-op game is a blast, for sure, but there are also dozens of single player features that will allow a creative gamer to be satisfied for weeks, custom level designing being only one of them. Trust me: whatever your heart has or had desired doing in Super Mario Bros. but couldn't, Mari0 will accomplish it for you easily. Please, go and download a free version of Mari0 now by clicking this link here. Support such an awesome looking game that would make any true video game fan shriek with happiness.