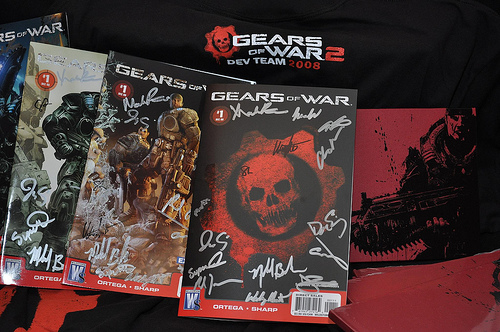 Looking for details of the contest?  Hit up this link.

We aren't the only site on the block having Gears of War promotions.  Below is a list of some other great community sites that are having contests and coverage of the launch.

·         GamerTag Radio: GTR is having live coverage of their local midnight events in Miami!

·         XBLRadio: They’ll be at their local Play-N-Trade in South Carolina covering the midnight festivities!

·         Pwned.com: The guys at Pwned are doing a weekend launch community play event and giving away the Gears 2 swag they picked up at E for All.

·         360Voice: Voice is having a special launch weekend contest, as well as a follow-up contest to support Gears 2 on its second weekend.

·         TheMarriedGamers.com: These guys have a full weekend of Gears 2 love planned, including community play nights, live podcasts, and more.

Also....with only 2 days to go till launch, the folks at Epic have released the game's opening cinematic trailer.  There's something really unique about it thought, curious?  Read on.

The 2 minute trailer tells the story of the great war between the humans and the locusts, but there's a twist. About halfway through you'll come to a shocking realization.

The intro is actually from the Locust perspective. Very interesting.