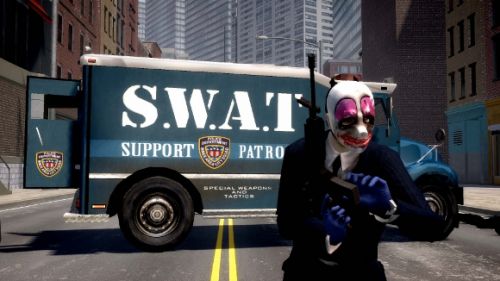 PAYDAY: The Heist players were given an Easter present this past weekend with a huge update that adds a higher difficulty setting to the game, new achievements and weapons, as well as drop in-drop out capabilities. Grab your mask, guns, and three friends who want to reinact Heat and check out the full update details.

For those of you unfamiliar with PAYDAY: The Heist, go read our review. The Coles' Notes version of the four player co-op shooter reads like this: You take the role of a hardened criminal where you need to carry out a heist. There is a series of objectives to each heist, and it takes a ton of teamwork to pull it off smoothly. Think Left 4 Dead, but instead of shooting zombies you are shooting cops and taking civilians hostage so your team can get the money and get out alive.

The update is for both PS3 and PC versions of the game. The main addition is the Overkill difficulty setting. Players that have already reached level 145 will have access to new achivements, weapons and don't forget the extra masks that have been added as well. A special golden mask is available to players who finish all heists on Overkill mode.

What gets the Co-Optimus crew excited is the very handy update feature that allows your criminal friends to join in mid heist. What we like to call Drop-In, Drop-Out 'round these parts is a welcome addition to any co-op game and makes the experience nice and smooth. If the AI team members are not pulling their weight, message a buddy and get them to hop in your game and GET TO THE VAN!

There you have it, the slew of PAYDAY updates that both hardcore heisters and weekend criminals can enjoy. Be sure to check out announcements coming from the game's official website for more information.