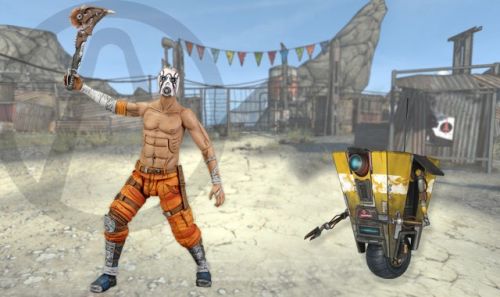 Some iconic Borderlands characters are getting the action figure treatment. Announced some time ago, the ClapTrap and Psycho Bandit action figures are now set to launch in May and June, respectively. These poseable collectibles are being manufactured by NECA, who have also made figures for other co-op games, including Gears of War, Army of Two, and Bulletstorm.

Both items are available for pre-order on Amazon. You can pick up the lovable/detestable ClapTrap at this link. The groovy little robot has a street date of May 30th and will cost $24.99. Everyone's favorite cannibal, the Psycho Bandit, is set for a June 27th release. You can pre-order the Borderlands coverboy right here. He'll set you back a cool $19.99.

I know more than a few gamers who would like their work area adorned with Borderlands figures. I hope these characters do well. I'd like to see some other inhabitants of Pandora done up in plastic - Skags, Bruisers, and the Crimson Lance come to mind. Maybe we'll get a few Vault hunters in the next batch.