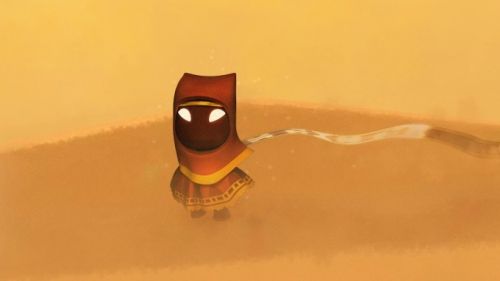 Remember a few weeks ago we talked about the Alice in Wonderland costume DLC for LittleBigPlanet 2? This week, we have a few costumes being release that are more involved with PlayStation gaming.

Like I said, lots of LittleBigPlanet 2 costumes have been coming to this game recently. This time around, Thatgamecompany and Fun Bits Interactive are lending LBP2 a couple of their most popular characters as DLC costumes for fans like you. Featured this week, two new costumes packs modeled after the PS-zen’s Journey and the PS Vita’s Escape Plan will be available to all Sackboy lovers who love an extensive wardrobe.

This DLC release was touched upon last month in a US PlayStation Blog update, but now fully revealed in this weeks, the Journey costume pack will include a special Sackboy version of the cloth hoodie (as well as those mysterious glowing eyes). Likewise, the Escape Plan costume collection will include the infamous black jumpsuit with numbers on it, looking pretty close to Laarg and Lil’s death count outfits found in the game.

I’m quite impressed with Media Molecule recently, the ones behind this mega popular title, having done quite well in keeping their community going strong since early last year. Just last week, they’ve done a few updates for the game, such as removing the negative “boo” comments on user made levels and giving the makers to toggle this feature on and off, as well as fixing the Dive-in features people have wanted. We need to have more and more companies these days following in their steps, because players like it when a game never stops giving.

No official price was set for the DLC costumes, but they will most likely take after the other LBP2 costume DLC’s which sold for about $1.99 a piece. They should arrive at some point during this week.