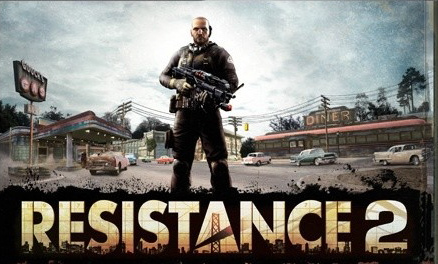 One of the key titles in this year's PS3 holiday lineup is Resistance 2.  Many features we love here at Co-Optimus have been implemented, such as an 8 player co-op campaign and local split screen co-op.  However, it appears there are some serious issues with the latter.  Co-Optimus reader "blakepro" was the first to bring this to our attention, in a forum post.  However, it seems the word is out, as you can read in this snippet from a review at PS3Blog.net:

Player 2 Progress Not Saved!
I saw online that Insomniac was thinking about tying player 2’s progress to their own PSN account, which would be cool. But at least the game would store progress locally, right? Nope! At one point during the evening last night I exited Resistance 2 and restarted my machine (see why below). Upon re-entering splitscreen co-op, all of Steve’s progress in leveling up his character was lost! This was a deal killer. Why put in all that effort to level up a character when all that work is lost? Crazy. This has to be fixed ASAP.

Reports of network errors when two splitscreen players try to play online are coming up, too.  This whole problem is a real deal breaker, at least in my opinion.  First Fable 2, and now Resistance 2 botch the co-op, at least partially.  Hopefully, a patch will be coming soon to change this issue.  (Thanks to user "billb" for the link to the review.)

Correction: the review quoted above was incorrectly attributed to PS3Lounge.  The article has been corrected, and I apologize.