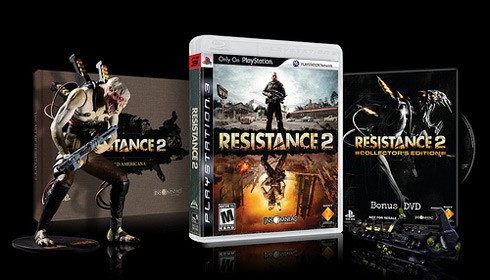 The folks at Insomniac are breaking a lot of ground with Resistance 2.  Not only will the game support over 50 players online in team based gameplay, it will support 8 players online in a special cooperative campaign.  In fact, the co-op campaign is so special in Resistance 2, it's been decided to have a public beta of it sometime in early October.  To gain guaranteed access you'll need to pre-order Resistance 2 at Gamestop or subscribe to the PSN Digital Magazine Qore.  If neither of these options are suitable for you, perhaps simply registering on the website will suffice - entry to the beta is not guaranteed though.

With a co-op beta early in October release must be getting close, right?  Actually it's getting very close, with Insomniac announcing a November 4th release date and details of a collector's edition of the game.  What's in the package?  A behind-the-scenes making-of documentary, video commentary from the game's developers, a "Twisted History" chronology video, an exclusive multiplayer character skin, a double-sided art book, and a preview of the unannounced Gathering Storm novel and a five and a half inch tall Chimera Hybrid action figure (Karate chop action not included).