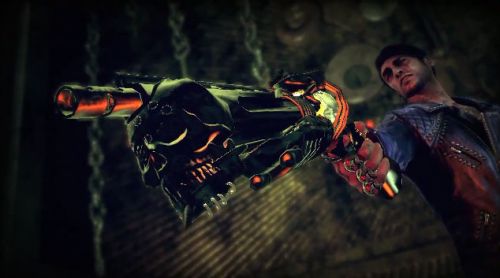 Epic Games' Cliff Bleszinski, famous for his work on the Unreal Tournament and Gears of War series, has gone on record stating that many Japanese developers are leaving an opportunity on the table by skipping out on co-op and multiplayer modes in their games.  While Bleszinski said he doesn't believe every game has to have a tacked on multiplayer experience, there's definitely room for it in titles because of the replayability it adds.

...The dialogue (in Shadows of the Damned) had me laughing out loud, just even the key-door systems in there; it was a beautifully crazy game with really fun gameplay, but no multiplayer co-op experience in there.

He goes on to talk about SEGA's game, Vanquish, which failed to sell well in the Western markets.

And if you're going to make a third-person shooter... the fact that Vanquish didn't have a multiplayer suite was a crime.  That IP, it was pretty good as far as being Western, but the gameplay was great, the vibe... and I've often said on record that if Gears is the kind of Wild, Wild West coal train chugging along, that Vanquish is the Japanese bullet train, with style and everything. And there is absolutely no reason I shouldn't have been zipping around, doing the mega slides, diving up in the air in an arena with other players.

Cliff did have some praise for a certain co-op game though from the far East, Dark Souls and Demons Souls.  He called it "one of the most innovative games" for its styles of multiplayer, which is always on and available. He went on to say "that game is going to continue to inspire a lot of Western developers to figure ways that you can have connected elements in campaign games, and have more of a blended experience."