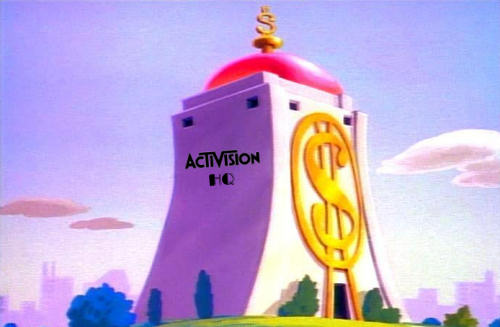 Ahh, the good ol days.  The days when EA was EA and Activision was Activision.  Somehow, somewhere in this wide universe roles have reversed.  Electronic Arts are releasing original titles like Dead Space, Mirror's Edge, and Army of Two while Activision is making 379 versions of Guitar Hero.

We've talked about how Activision had dropped 50 Cent: Blood on the Sand and Ghostbusters upon their merger with Vivendi.  During a recent investor earnings call, Activision CEO Bobby Kotick told all the reasoning behind it.

The games Activision Blizzard didn’t pick up, he said, “don’t have the potential to be exploited every year on every platform with clear sequel potential and have the potential to become $100 million dollar franchises. … I think, generally, our strategy has been to focus… on the products that have those attributes and characteristics, the products that we know [that] if we release them today, we’ll be working on them 10 years from now.”

Exploited was the one word he probably shouldn't have used, well that and milking.  Because it's now clear that is Activision's strategy in the gaming industry.  Personally, a game like Ghostbusters I can see go a long way if done correctly.  50 Cent - sure maybe not - though it is a sequel already.  So SOMEONE had to buy it...right?