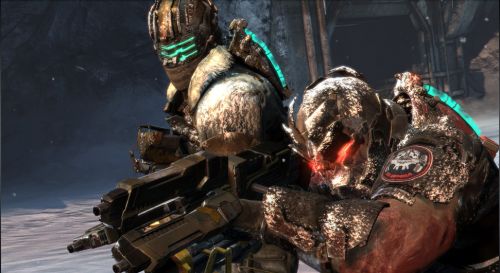 It's been rumored for a while, and now we have confirmation that Dead Space 3 will have two player drop-in/drop-out co-op. While we were limited to watching co-op footage at the EA press conference, the folks over at Polygon were able to get some pre-E3 hands-on with the game and filled in most of the gaps for us.

While playing in single-player, Isaac will periodically see another survivor battling the Necromorphs, almost as part of the scenery. If you play a co-op match, your partner will take control of that soldier, John Carver. Even better, weapons and armor you've earned in your own game will carry over into co-op, so you're able to play at full power.

Additionally, the Dead Space website was updated to say this regarding the co-op:

Fighting alongside a co-op partner changes the way you play the game. While playing the co-op version of Dead Space 3’s campaign, you will uncover additional story elements, cut-scenes, and battle strategies that are exclusive to this mode. Play how you want - immerse yourself in the classic single-player campaign with Isaac Clarke, then discover how the story evolves when a co-op partner is present in your campaign.