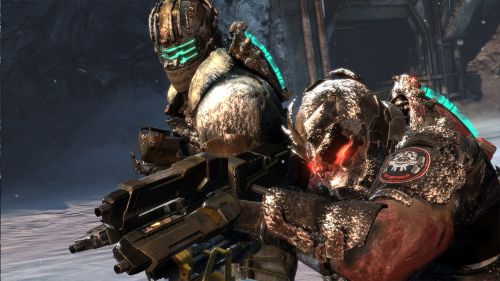 The Dead Space 3 public demo is available now on the Xbox 360. It will be available later today when the PlayStation Network receives its regular update. Nick and I played through the demo cooperatively last week and offered our impressions here. You can co-op the demo yourself with on online partner. I don't mean to tell you your business, but you should probably check it out. It was good enough to inspire me to start playing the original Dead Space again.

On a more expensive note, Eurogamer revealed the fact that the weapon crafting system will include micro-transactions. When trying to make a particular weapon they were told they needed additional resources. These resources could be discovered by the player, salvaged by bots, or paid for with real life money.  You just know EA's gotta get that CA$H! Before you go crazy with nerd rage, Eurogamer pointed out that Dead Space 3 executive producer, Yara Khoury, said you don't need to empty your physical wallet to add to your in-game arsenal:

You can buy resources with real money, but scavenger bots can also give you the currency that you can use on the marketplace... So you don't have to spend [real world] dollars."

Okay, so I don't have to, but what if I want to? Can I drop some unspecified amount of money at the first workbench and build a Blastomax 5000000, complete with regenerating ammo, power windows, and a bacon sandwich? NO! That would be cheating! Khoury went on to explain:

There are a lot of weapon parts that are only available to buy later in the game. Unless you're playing through it again [on New Game Plus]."

Having reacquainted myself with Dead Space, and after playing the demo, I can see how micro-transactions could greatly impact the game. Especially if your co-op partner, Spendy McRuinseverything, plops down some of his trust fund cash for a fully automatic chainsaw launcher which has an alternative fire mode simply called "Dim Mak," while you're stuck with a standard plasma cutter, its alternate fire mode being a 90 degree rotation, which most people can accomplish with their wrists. Yeah, you might want to syphon off some beer money for a better gat.

I don't really care, as long as I'm not farming enemies for resources in a "horror" game. That would be truly terrifying.

Dead Space 3 supports two player online co-op. It will launch on the Xbox 360, PlayStation 3, and PC on February 5.