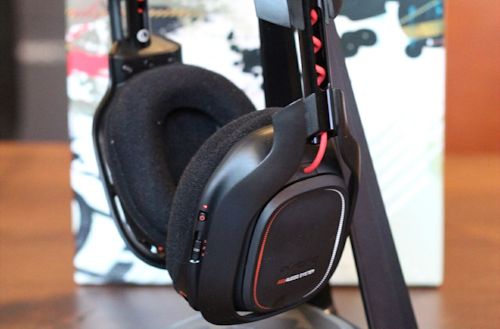 The Astro A30s are my go to headset, but I've been eyeing up the A40s for quite some time.  Now with the Astro A50s on the horizon, basically a wireless version of the A40s, it might be time to finally upgrade my ear cans.

If you don't know who Astro Gaming are, they are an offshoot of the industrial design firm Astro Studios.  Astro Studios are the folks responsible for the original Xbox 360 design.  Most folks have wondered why it's taken so long to get a wireless version of their A40 headset, which is one of the most popular headsets in gaming today.  The biggest reason for this had to do with wireless bandwidth said Marketing Manager Stan Press, "it just wasn't there until now".  That's where the new Kleernet 5.8Ghz chipset comes in, allowing Astro the bandwidth and clarity to push the entire spectrum of the audio stream needed by their headset drivers.

The Astro A50s look similar to the A40s but have a few unique changes.  While they feel incredibly solid, I was surprised how light they actually were.  Gone are the old ear plates, instead the volume of microphone and game audio balance has been moved to the ears with a click plate.  The reasoning for the removal of this feature is two fold, but it comes down to the magnets in the plates not playing nice with the wireless.

One incredibly slick feature is the flip up microphone.  While having a microphone the flips up out of the way isn't great, the fact that flipping it up MUTES the microphone is ingenius.  Seriously, how did nobody think of this before?  You'll also find discrete buttons for Power and EQ on the headset.  There are three EQ settings including a normal and Pro mode. We played a few rounds of Call of Duty: Modern Warfare 3 Spec Ops with the headsets and they made me feel right at home.  The clarity that Astro provides is top notch, you can hear every bullet casing hitting the floor.  I'd like to see how they feel after an extended session, but 10 minutes with them on and I hardly noticed.

It was hard to judge just how well these will stack up against the A30s, but since the 30s are geared more towards portable/multi-use gaming I expect the A50s will have a much fuller sound when I put them through their paces.  Even cycling through the few presets available I was impressed with what these cans could crank out.

I have been using the A40's for a number of years now, as they are one of the headsets in my arsenalt of sound. The A50's are a bold step in headset technology, being that they retain the sound of the A40's but put them into a completely wireless package. I was astonished that Astro was able to fit so much into the headset and still keep their sleek design. Moving to a wireless system is always scary because when you cut the cords, it usually means you are sacrificing something like sound quality or gaining a heavy battery pack. The A50's do not weigh much more than the A40's and as Nick mentioned there is a plethora of new features contained in this premiere headset.

Astro will begin taking pre-orders on the A50s in about two weeks, with an expected ship date sometime in July.  The price is a steep $299.99 - which really isn't too far out of line for some wireless headset.  Everything from the build quality to the packaging screams WORTH IT to me.