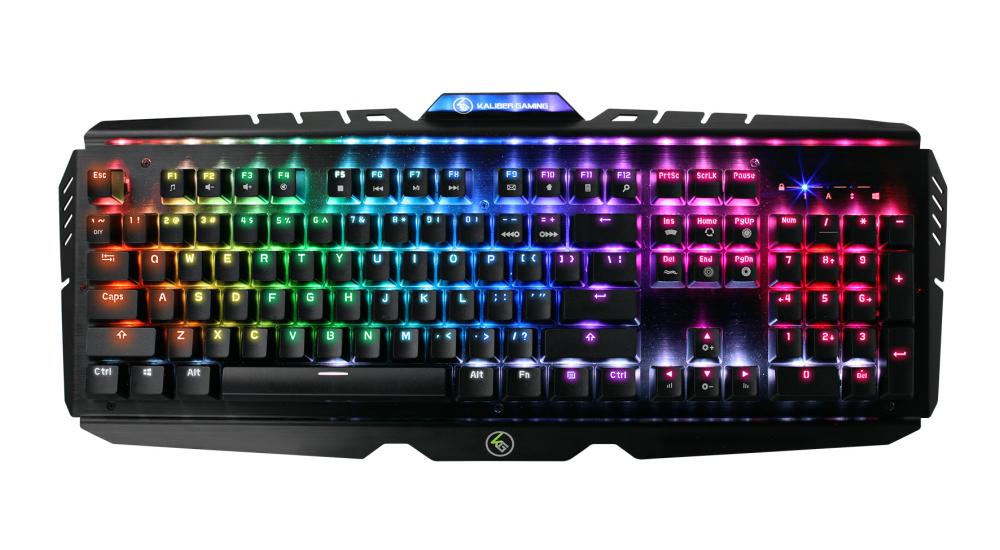 Each piece of gaming hardware can greatly alter the experience of the game being played. A faulty headset and the whole team feels the impact when you fail to communicate danger in time; a lackluster mouse and your interaction with the world through selection or direction can become more of a hurdle than it should be; and with a subpar keyboard the entire experience can be slammed to a halt, no matter the game. Thankfully, Kaliber’s HVER PRO RGB Keyboard does a great job whether it’s under the pressure that comes from the heat of a game or writing this very review.

My time with the HVER PRO started simply with some writing just to get a feel for the hardware. I found myself acclimating very quickly to this keyboard even though it sits slightly higher than the non-mechanical one it was replacing. The keys are large enough that I never had to think about where they were in relation to where my hands felt they should be, so I soon found myself typing away at the same speed that I normally work. Now that I was warmed up it was time to move into the real use for a gaming keyboard: video games.

I hopped into Skyrim first and instantly was having a blast, feeling the impactful clicking of the keys under my fingers that were responsive and quick. I type fast and game faster, so knowing that my keys were there to keep up was a breath of fresh air. I have had keyboards that simply can’t keep up before as they would mush my strokes together, both in typing and during gameplay, resulting in a lot of me backtracking to edit words typed or trying to recover from misstepped movements. I moved to Catacomb Kids next, which is more of a platformer as opposed to first-person action. This time all action was performed on the keyboard and it went swimmingly. Platforming requires precision movement and in this game the combat is demanding and quick, all of which the keyboard performed beautifully for, as it caught the most minute (but needed) indications from me, meaning the only times I died I could be confident were one hundred percent my fault.

The HVER PRO has a metal backing to it so it feels heavy, grounded, and remains slip-resistant both through the grooved feet and the pure weight of the hardware itself. The pleasure of using the keyboard is amplified by the light settings, as it features 18 different variations that can be set up straight out of the box using different keystroke combinations without downloading or installing any additional software. These backlight effects range from a constant, monochrome light to wave-like lights that change in a pattern, all the way to impact-lighting where the keys light up when pressed and send that light out as though it was a ripple effect. This is so fun and makes it easy to personalize such an everyday piece of technology. If you are not a fan of the more flamboyant lighting you can just as easily tone it down as the backlights brightness level is just a simple button press as well. Other more established, standard features are on the keyboard as well, such as pressing the “Fn” key and being able to pull up mail, the calculator, and adjust the volume on the computer. This is all normal stuff that I have had on simpler keyboards, but the inclusion keeps the HVER PRO RGB feeling that this isn’t just a superfluous device; it is an all-encompassing piece of hardware that is just as useful in the game as when you’re browsing the internet, trying to discover new strategies, watching videos, or any other typical uses for your computer.

The HVER PRO RGB comes with either Red or Brown switches and this review was completed using the Brown simply for personal preference. I have not personally needed to alter the actual configuration of the keys on the Kaliber, but thankfully it is easy to do as the tool required to do so is stored in the back of the keyboard. While not a feature for everyone, this forethought is appreciated as it shows that Kaliber was genuinely through as they went about making their hardware accommodating as well as universally useful.

After spending hours writing and gaming, it is incredibly easy to recommend the Kaliber HVER PRO RGB. I fought long and hard with myself about any major downsides to the hardware and I was simply at a loss. It feels good, it looks good, it is as loud as any mechanical keyboard ought to be with the familiar sounds of the clicking along that can often feel like the metronome of gaming. Simply put, if I’m not using the Kaliber when I’m using a keyboard, I will have a pang of regret, wishing I was.