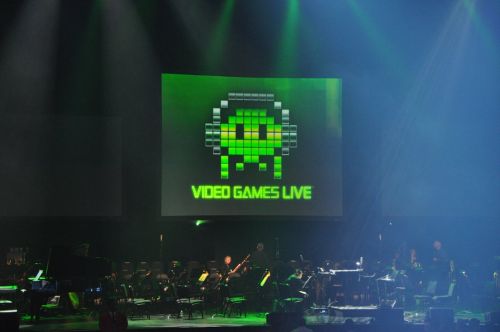 On Wednesday night the Co-Opticrew headed to the Nokia Theater to relax a bit after 3 solid days of hard work.  We were set to see Video Games Live, a concert which features music from various video games played with a full orchestra and mixed with visuals from said game.  The show was created by industry veteran Tommy Tallarico, a video game composer himself of over 250 games including Earthworm Jim, Prince of Persia and Advent Rising.  Tallarico also used to host a TV Show on the G4 Network, which you would think would make him the perfect host for something like this.  You'd think.

The night opened up with the medley of Castlevania tracks, with Tallarico leading the charge wailing on his electric guitar.  It was a solid rendition all around and definitely go the crowd into it.  From there we jumped right into Sonic the Hedgehog and the show was moving right along...until it came to a grinding halt.  Tallarico brought out Walter Day from Twin Galaxies and Billy Mitchell (King of Kong) who couldn't look the audience in the eye, to hock some trading cards that were a new property of the high score record keeping company.  This wouldn't have been so bad if it didn't occur EVERY OTHER SONG.  There was absolutely no flow to what we saw, according to Co-Optimus Video Guru Locke Vincent, who saw VG Live in Calgary, this was not the norm.

While the music was spectacular for the most part,  the Skyrim theme being conducted by a Blizzard composer while Jeremey Soule watched via Skype was goose bump inducing and the Halo medley really brought Martin O'Donnel's score to life.  Soule even was announced as a composer for the upcoming World of Warcraft expansion, which should make video game music fans quite happy.  But the constant breaks for PC hardware sponsored contests and trading card awards to various industry members like Tim Schafer, Nolan Bushnell, and others were nails on a chalkboard. Yes Billy Mitchell, you should be ashamed to be up there.

It's truly a shame too, because there were several note to be missed moments.  Al Lowe, of Leisure Suit Larry fame, had an amazing solo of the theme song from the game on saxophone.  Lindsey Stirling showed what has made her a YouTube sensation as she played a Zelda medley and danced in only the way she could on stage.  Austin Wintory, composer for Journey, conducted the orchestra in dramatic fashion showcasing a beautiful piece from the game.

And then whatever mood and good will was created by these amazing pieces were crushed by Tallarico thanking another sponsor or Walter Day shoving trading cards down people's throat.  When ticket prices range from $25 to $110 a seat (that's actually $35 to $125 after convenience charges) - there's absolutely no excuse to have that much sponsorship.

Ah well, I digress.  I was told this was not the norm so don't let this deter you from seeing an amazing show if Video Games Live comes to your neighborhood.  Just don't be surprised if Billy Mitchell tries to sell you "gamer hot sauce."