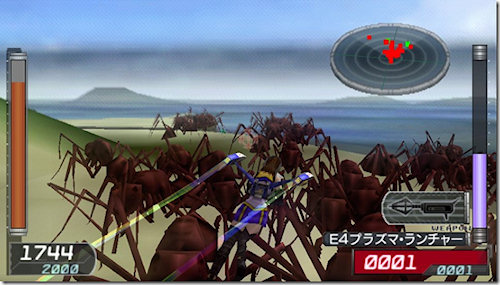 It was only a few short weeks ago we told you about a portable version of Earth Defense Force 2 on the PlayStation Portable.  As of now, the game is only announced for a Japanese release, but with a full fledged console sequel on the way later this year, we're crossing our fingers for some co-op bug squashing on the go in the rest of the world.

Players snagging the game in Japan aren't just getting the game first, they're getting another bonus. All first run copies of the game will include an extra copy of the game for their co-op partner.  It seems D3 realizes this is a game best experienced with a friend - after all, which game isn't.  EDF2 Portable is out on April 7th in Japan.