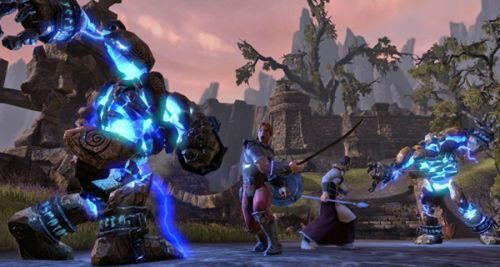 There were plenty of MMOs on display at E3 this year, but not enough time to see them all between our other duties. As the only staff member in attendance who really plays MMOs, it fell to me to check out the two that seemed most interesting, The Elder Scrolls Online from Bethesda and Core Blaze from Gamania.

The Elder Scrolls Online had me chomping at the bit when it was first announced - the Elder Scrolls series has been near the top of my PC RPG hype list ever since I played Daggerfall back in high school, and what would be better than a rich, online version of that world? Unfortunately, the details that came out of its reveal in Game Informer left me scratching my head. A largely solo storyline? Built using the Hero Engine, which also powers The Old Republic? These things didn't sound too Elder Scrolls to me, so I'd largely written it off.

Even though the storyline is going to be a largely solo affair, the developers are doing a lot to facilitate emergent co-op play. While the usual dungeons and raids (with the expected difficulty tiers) are present, more uncommon features like public quests (and dungeons!) are available, where anyone in the area can contribute. If you help another player in the world take out an enemy, both of you will receive all credit whether you are grouped or not.

The combat is designed to roughly approximate a traditional Elder Scrolls game, and it seems about halfway between an action-RPG and standard MMO combat. You still have three meters to manage (Health, Stamina and Magicka), and while you still have special abilities mapped to a hotbar, any ability key can be held down extra long to trigger a power attack. You're also able to block at will, and just like in a "real" TES game, a well-timed block will stagger/stun an enemy after they try to land a power attack on you.

In an interesting touch, player abilities modify each other. The example we were shown was a warrior class encountering a mage who was casting a fire spell. The warrior was able to chain an ability of his own into the mage's fire spell, causing it to become a melee-AOE spell. This seemed like the most unique system to me, since it also serves to mix up traditional MMO combat even more than the active blocking does.

So while I'm still not completely sold on The Elder Scrolls Online, I have a little more hope than before. Any MMO that started development five years ago will be challenged by the market of 2012, as it seems like subscription-based games are on their way out. I mean, if the Star Wars license and Bioware's name can't keep a title like The Old Republic populated, I'm not sure that the Elder Scrolls name will fare any better. I knew almost nothing about Core Blaze before I sat down at my hands-on session, which was held in the penthouse of a building just about a mile from the LA Convention Center. It was nice to get away from the hustle and bustle of the show floor for a bit and check out one of the most interesting MMOs I've played in quite a while.

After being sat down at my demo PC, one of the developers asked me if it would be okay to set me up with an eye-tracking device, which I later found to be gathering metrics to gauge the effectiveness of their UI. Both a gamepad and mouse/keyboard options were available for me, and being the elitist PC gamer I was, I naturally chucked the controller aside and started playing.

There are no character classes in Core Blaze. Your skillset is defined by whatever weapon you choose to carry, which is slightly similar to what we've seen so far in Guild Wars 2. The other important thing to know is that Core Blaze is actually a character action game dressed up like an MMO. You can string combos together, launch enemies into air combos, and dodge roll to your heart's content.

Remember how I said I used the mouse and keyboard? This turned out to be a bit of a mistake, as it became increasingly obvious that the UI has been designed around use of a controller, which makes sense considering how the combat feels. Sheepishly, I switched to the provided controller about halfway through our demo and the fun factor of the game ramped up considerably.

Killing enemies fills up your blue (mana?) meter, which in turn allows you to activate your special attacks, which are very powerful, hence the restriction on their use. You can also enter a focus state which drains your stamina, but removes the hard cap on your melee combos.

My demo party was led through a few quests, both culminating in boss encounters. The first boss was mostly a pushover, where my party members and I just wailed on him until he stopped breathing, but the second boss we were led to required we actually use some form of strategy to survive. This particular boss was weak to fire, and we were shown one of the more interesting things of the day: the ability to craft traps on the fly.

I had an oil cannister in my inventory, and was instructed to use it to pour a line of oil along the ground where we'd be trying to kite the boss. Once it was laid, I used a torch to light it, and my two party members lured the boss into the flames, setting him ablaze and severely weakening his armor. Not long afterwards, we were celebrating our victory.

Other features of the game include a dynamic weather system, which affects your abilities in ways that make sense, and the passage of time also determines what content you might be running into whilst exploring. Core Blaze is also built on Unreal Engine 3, which might be the first MMO to do so.

Apparently the structure of the game is less based on set quests (though they exist) and more on exploring an open world full of dynamic events, which we didn't get too many details on, though I was again reminded of what ArenaNet is trying to do with Guild Wars 2.

Core Blaze was certainly an interesting experience, and the developers stressed that they want to encourage players to explore the world and tackle combat challenges together. I've never played an MMO quite like it, and I'll definitely be interested in checking it out again when it releases.