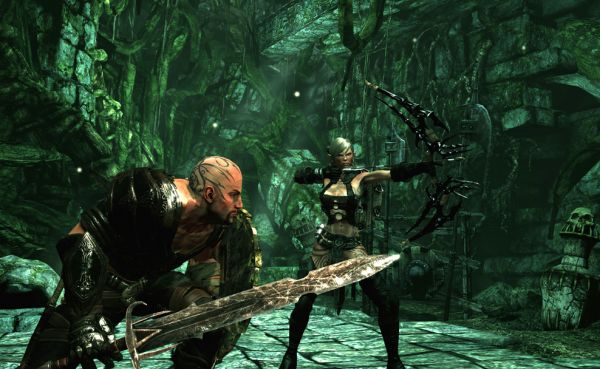 When Eric and I were deciding on a game to play for TWIC we ran through a plethora of titles that would work just fine but outside forces stopped us from finding that perfect title. One of us would not own a game the other chose, or when we did own the game it would be on the wrong platform. For whatever reason; call it luck, destiny, or predetermination, fate would conspire to finally find the game that we were to play together.

But fate is a cruel mistress.

What happened next I cannot clearly remember, but it was decided that Hunted: The Demon’s Forge was the game that would seal our co-op partnership forever. Hunted is by no means a great game, and a mediocre one at best as you can tell from our review. If you think of it as an action RPG that blends Gears of War with your typical fantasy setting, this one closely resembling Lord of the Rings. The number one rule about Hunted, as told by our Senior Editor Andrew Gaskill is that it should never be played alone. With this in mind, Eric and I suited up and hopped into the dark world of Hunted.

When I played Hunted at PAX 2010 I was excited for an ARPG where you had more control over the character. Teamwork was pivotal for success as the set pieces required one person to cover the other with a volley of arrows until the other could get in close for melee attacks. Fast forward to 2012 where I finally sit down and play the game for an extended period of time and all of that is still there, except...that is pretty much all the game is. Set pieces and kill rooms in a bland world make Hunted very repetitive and something that can get boring really fast, if you don’t bring the right co-op partner along.

Co-op improves anything. People who've been held in torture camps will recount how friendship got them through the ordeal.

Having a good partner doesn’t help the experience of a game, it MAKES the experience. Eric was an awesome co-op partner because we were both equally frustrated at the game, and were willing to play it out for the sake of science. Even if a game is mediocre, there is something about having another person there that you can at least create a story with. Who wouldn't want to have E'Lara as a co-op partner?

Playing as the sexy elf E’lara, I would cower behind Eric’s hulking barbarian Corrac and fire arrows at anything that popped out of cover. He was the perfect meat shield and our playstyles complimented each other perfectly. Anything that I didn’t shoot in the head, he would smash to pieces and it worked out for the couple hours that we shared together.

This is why co-op in this generation is so important. It can make an average game great, a perfect game better, and even a poor game fun. A co-operative mode should never be tacked on, but well thought out through the design of the game. If all goes well, it can make something like Hunted into a an enjoyable game that may get lost in the overwhelming amount of released titles we see every year.

When Nick sent out the TWIC schedule a few weeks ago, I won’t lie, I was pretty pumped that I was paired up with Locke. He’s a fun and easy-going guy, so I figured he’d be a good partner for my TWIC debut. As Locke stated, we had two issues initially. Our busy schedules, and game options. Perhaps I should say my game options. You should see this guy’s library, it’s impressive. I can’t bring myself to call my collection a “library” as it only fills one shelf of a bookshelf.

Eventually, Locke suggested Hunted: The Demon’s Forge, a game my wife bought me a couple Christmases ago. My wife has been my dedicated co-op partner for several years, and she thought it would be a great game for us to enjoy. After struggling with the first level, she changed her mind, and the game has been on my wall of shame ever since. Since then, she has pretty much given up gaming completely, which has left me with a fair number of unplayed couch co-op games, but no meat-space friends to play them with. Luckily, in the case of Hunted, online co-op is also an option. In fact, online is probably the better option, since the graphics quality in split screen is pretty poor. The main reason my wife gave up is because we couldn’t see half of the archers who were riddling us with arrows. Even online, the grey and black color scheme makes it difficult to spot the stick throwers.

I was happy to hear that Locke had not played the game at all, so we were both firing up the game with little experience, and boy did it show. We struggled a bit when setting up a game, and then the first thing we did in-game, was accidentally switch characters. If there’s something the developers did right, it was to allow the players to switch back in this awkward situation. While Caddoc’s leather pants aren’t exactly my style, they were definitely more comfortable than that tiny little thing that E’lara wears. We switched back and began our voyage in much more familiar clothes. E'lara kicks butt, and it shows...

If you’re looking for a game with a deep story, flashy graphics, and amazing action, Hunted is not the game you’re looking for. It’s repetitive, quirky, and the world is just dark. That said, it can be an enjoyable experience when shared with a friend. Locke was that friend, and I must say, we worked quite well together. I was playing as Caddoc, who is one massive warrior, so I tended to watch for an opportunity to charge, then bash heads with whatever melee weapon I had at the time. I tried using the shield, but I’ve never been good with shields, so that usually just delayed battle for a few seconds. I found it was better to just charge in swinging. This clearly wasn’t the best tactic in every situation, as I was cut down several times. Good thing I had a co-op partner who was always quick to toss a healing vial my way. Locke was also good at picking off archers and any other Wargars who escaped my swinging weapon. There were only a few times where we both fell in battle, but after a quick checkpoint reload, we were always able to adjust our tactics to overcome the enemy the second time around. One time in particular, I made a rather foolish decision. I jumped on a ballista while Locke was left to fight in close quarters. Clearly we weren’t fighting with our characters’ strengths in mind and we both failed during the first wave of enemies. Locke took the ballista for our second go, and we cleared that area in no time.

Had I been playing alone, or with a random player, I’m pretty sure I wouldn’t have cleared the first level. This game is rough, and gets frustrating. In fact, our night ended with a game breaking bug where E’lara was supposed to light something on fire, but no amount of fire arrows set the target ablaze. We walked around the level several times trying to find something we may have missed with no success. It was an unfortunate end to our night, but I still enjoyed poking fun at the game with my man Locke Vincent. Thanks buddy!