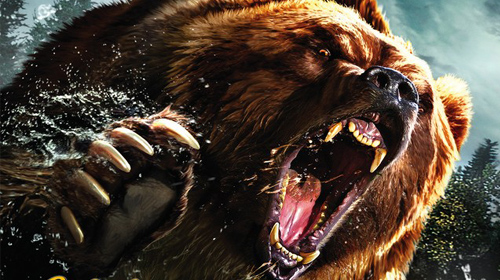 Get your camouflage ready and grab your neon orange hat because Cabela's Dangerous Hunts 2013 is putting a new gun in your hands. Pack two bags because they have also announced that there will be 2 player co-op in the new 'Maneater' mode.

This year's Cabela's entry is going to be packaged with the new Top Shot Fearmaster, which looks like a small shotgun. It should be noted that the Playstation 3 and Xbox 360 games require this fierce weapon, but the Wii will simply use another plastic peripheral that you hook your Wiimote into. The Fearmaster also includes a heart-rate monitor and a motion stability sensor, which will affect your in-game character. If your pulse is racing, it is going to reflect the accuracy in the game. It sounds like a pretty cool addition to the franchise, so let's hope that the technology holds up. Activision is toting their new animal AI system that takes a page out of Jurassic Park. Fierce beasts can now travel in packs who will try to surround and ambush you. The single player campaign is being written by Andrew Kreisberg of Simpsons, Boston Legal, and Fringe fame. It centers around two brothers who come together after a family tragedy. After 10 years of being apart they look to repair their relationship by going on a hunting trip.

The Maneater co-op mode does not have a ton of details behind it. We know that it is 2 player local co-op with split screen capability, but no information about online has come out yet. It's safe to assume that your partner will need their own Top Shot Fearmaster, unless Activision decides to include a driving portion where one player uses a racing wheel. Either way, be ready to fill your room with more plastic toys. Cabela's Dangerous Hunts 2013 will be available on October 23rd on Playstation 3, Xbox 360, and Wii. The game will be sold stand alone, and with the gun peripheral packaged in (for an increased price of course).