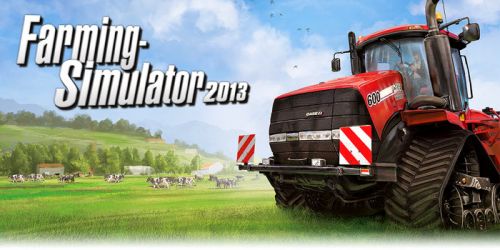 Nothing says good ole fashioned family fun then a farming simulator!  Apparently the success of Farmville has bred new life into the genre, which hasn't seen a big hit since 1994's Space Marines vs Martian Ears of Corn or last year's hit game, Farm Machine Championships.  Focus Home Interactive is looking to bring the genre away from Facebook and back to the core gamer with Farming Simulator 2013, which will be available on PC, Xbox 360 and PlayStation 3.

Animal husbandry, crops, sales… It's up to you to manage and grow your own farm in a huge, totally new world. As you progress in your career and complete different missions, you'll control more than a hundred farming vehicles and machines faithfully recreated from the biggest names in the industry: Case IH, Deutz-Fahr, Lamborghini, Same, Horsch and newcomer Grimme… This year, Farming Simulator is back with even more diverse crops (sugar beet and potatoes), new livestock (chicken and sheep) and new vehicles never seen before in a video game!

Well heeee-ya!  If that doesn't sound like a hoot, how about 10 player online co-op play?  Can you imagine the tractor chaos that is about to ensue?  I'm gonna plant beets SO HARD.  I can hardly wait.  I call the red one.

Also, first person to make a zombie mod for this game gets a zucchini.

Farming Simulator 2013 will be out on PC this October and out on Xbox 360 and PlayStation 3 early next year.