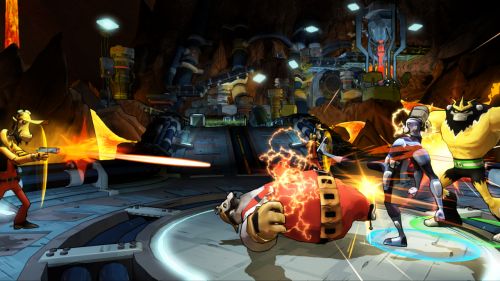 The long-running Ben 10 franchose is back with an all new series this fall. Cartoon Network's shape-shifting, super-cool teen is headed to your TV in Ben 10: Omniverse. It's pretty much a requirement for these shows to have a video game tie in these days, and Ben 10: Omniverse is no exception to this rule. Xbox 360, Playstation 3, Wii, and the upcoming WiiU will all get versions of the new game.

Ben 10's crazy alien forms make for some pretty good video gaming, but there is a problem as far as co-op is concerned: who's cool enough to keep up with an Omnitrix-wearing kid? How about an alien named Rook who wields the Proto-Tool, "a high-tech multifunction weapon designed to battle evil." Sounds pretty awesome to me! Check out the video below for a glimpse of what looks like a solid beat em up for two local players. Ben 10: Omniverse releases on November 13.