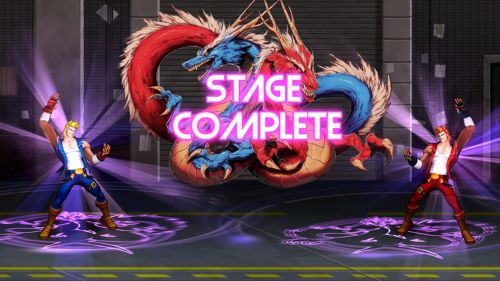 No, it's not here yet. You'll have to wait until next week. For now you can get your co-op on with some brawling, shooting, or strategizing.

Anomaly Warzone Earth (PSN) This action/strategy hybrid title's co-op mode is exclusive to the PSN, which is cool for PS3 owners, and lame for everyone else. One player handles the strategy while another player controls the combat units. The trailer says it's uber-cool. You're not going to argue with a trailer, are you? 2 player local co-op

Battlefield 3 Premium Edition (360, PS3, PC) It's a lot like the game that came out last year, but this one will include the five expansion packs, advanced weapons, and nifty gadgets. There's actually a lot of extra content. Wouldn't it be nice if someone linked to a page that listed all of the features? 2 player online co-op

Double Dragon: Neon (PSN, XBLA) I'd like to think that the above header image accurately represents the feel of the entire game. DD: Neon looks so damn disco. I can't wait to get my groove on. There needs to be more dance battle games. Sadly, I think the Lee Bros are going to solve all their problems by punching dudes.  2 player local bro-op

Here are the retail titles coming out this week, complete with Amazon links. If we missed anything please let us know in the comments section.