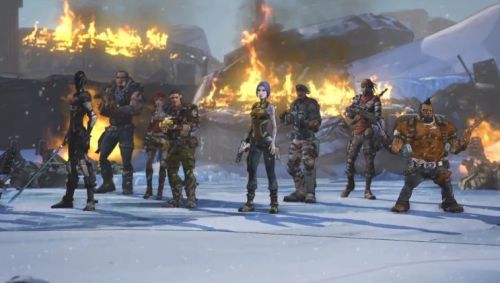 It's happening. I know many of you are waiting for midnight, or you're anxiously checking tracking numbers. Don't worry. It will get here. Maybe. Wouldn't it suck if the Mayans were bad at math, and the world ended tonight at midnight? I mean, yeah, the end of the world is bad, but no Borderlands 2? Tragic.

Borderlands 2 (360,PS3,PC) Wow. Did you see that frick'n launch trailer? There really isn't much more to say, is there? Oh, our Co-Op Review will be live at midnight tonight. You may want to check it out. 2 player local co-op, 4 player online co-op, combo co-op

F1 2012 (PS3,PC,360) If shooters and action RPGs aren't your thing, you can get your race on with a buddy and all the official teams, drivers and circuits from the 2012 season. 2 player online co-op

Kinect Nat Geo TV (360) It's nature, it's learning, it's Kinect. If you like your gaming educational and kid friendly, you should check this out. 2 player local co-op

Realms of Ancient War (XBLA) This might be the least desirable release date for a new, smaller IP I have ever seen. R.A.W. is a very nice looking game. I hope people remember to try it out once the dust settles from the Borderlands 2 and Torchlight 2 launches. 2 player local co-op

Torchlight 2 (PC) Fantasy fans are hoping this highly anticipated sequel will fill a hole in their hearts that was only partially filled by Diablo 3.  6 player online co-op

Here are the retail games coming out this week, complete with Amazon link for your buying convenience. If we missed something please do everyone a favor and let us know in the comments section.