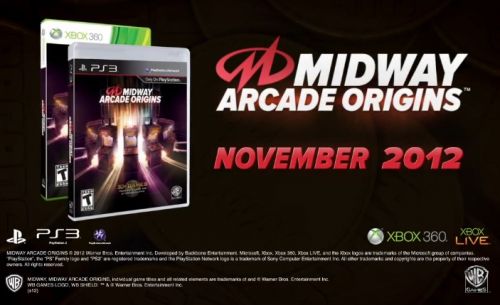 When Midway went out of business in 2010, their XBLA titles like Gauntlet and Smash TV got pulled - sad times all around. Since then, Warner Brothers rescued the Mortal Kombat franchise with a fantastic retail sequel and the so-so downloadable compilation, Mortal Kombat Arcade Kollection. Later this year, Warner Bros. will bring much of the Midway archive back to consoles in a new retail compilation, Midway Arcade Origins. Naturally, it's packed with co-op classics at relatively low price.

This compilation is a retail disc with 1000 GamerScore worth of Achievements on Xbox 360 and Trophies on Playstation 3. As such, the Achievements for Gauntlet, Joust, and Smash TV will not be identical to their delisted XBLA predecessors. Nor has Warner Bros. announced online co-op for this collection, a feature touted by those delisted ports. Still, at $29.99 Origins should be a terrific value for arcade fans; that's just one dollar a game.

Wondering how Origins stacks up to the original Midway Arcade Treasures (Xbox/PS2/GameCube) compilation? Here are the games included in the first volume of Treasures:

So yes, the new compilation is better. I will miss Klax though!

Midway Arcade Origins is due this November. It will support local co-op for up to four players, depending on the game.