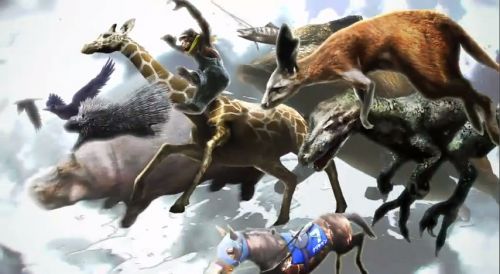 Tokyo Jungle arrived on the PlayStation Network yesterday. I picked it up out of curiosity, having heard that I would get a chance to fight a lion with a toy dog, or some such nonsense. As I was cruising the menus I was surprised to see a local co-op mode. The game has been out for a spell in Japan, so it’s no big secret. We missed it though, sorry.

I started up the pomeranian survival mode to see if the game was worth covering. I began my adventure at 7:30 last night and played until 2:00 am. Tokyo Jungle had just sucked six and half hours of my life away. I guess we’ll cover it. If you haven’t heard of the animal survival title, here’s the launch trailer.

Okay, that may not have been very clear. The game is basically a brawler/stealth/survival title with RPG elements. It features over 50 different playable animals, from house cats to actual dinosaurs. You can even put them all in little outfits. You’ll have to play to the strengths of each creature. Two players can co-op together on a shared screen in survival mode.

I know, survival modes are the epitome of “tacked on” co-op. Unlike other titles, Tokyo Jungle’s “Survival” mode is the real meat of the game. Each animal I played had different challenges to overcome. This game will provide hours of entertainment - to a particular audience. Just how particular remains to be determined. I’ll put some more time in and have a co-op review up for you early next week.