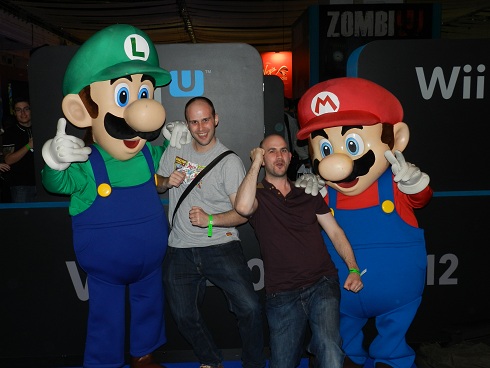 The leaves are a changing colour and it is even wetter than normal here in olde England, which can only mean one thing – the Eurogamer Expo!  It may have happened at the end of September this year, but better late than never I say and I got to play several co-op titles on the Nintendo WiiU.  Check out hands on previews of Rayman Legends, Nintendo Land and New Super Mario Bros U. When I think of Nintendo consoles, I often find myself pondering why the first party games are so much better than the majority of third party games.  The magic of Zelda, Mario et al. seems to rarely rub off on developers outside of the Nintendo stable.  This may be about to change with the Nintendo WiiU as Ubisoft’s Rayman Legends is a great game, arguably surpassing what Nintendo have to offer at launch.

As explained in this video, Rayman Legends offers asymmetrical Co-Op, a form of cooperation where you work together, but players have differing gaming experiences.  At Eurogamer I was able to play Rayman Legends using both a traditional style gamepad and the new WiiPad.  Firstly, on a purely base level, the game looked great, easily up there with the HD visuals of the first game on 360.  However, as great as the art style of the newest Rayman games has been, we are interested in the co-op.

That also works brilliantly.  Neither player feels left out, the traditional gamepad player has a superior platformer to play, with more than a pinch of uniqueness to each playthrough.  This is provided by the other player who controls many of the environmental aspects from the WiiPad.  They can release platforms, destroy enemies and highlight paths.  One great element is when the screen needs turning.  I had flashbacks of the parallax scrolling on the SNES as I twisted the WiiPad so that the screen turned.  Meanwhile, my gaming buddy had to keep platforming as the world twisted around them.

From the preview I was able to play, it appears that Rayman Legends will have plenty of fun ways to use the WiiPad.  More importantly, the implementation of the WiiPad is on top of an excellent platform title.  Co-op game of the Expo for me.