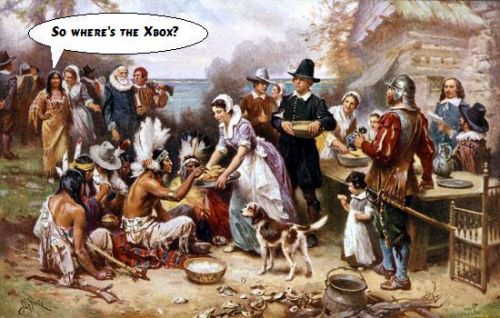 Well, we surely have many things to be thankful for, and co-op is one of them.  If you think about it, the first Thanksgiving itself was co-op in its greatest sense: a large group of individuals working together to ensure the survival of all.  Those n00b Pilgrims would have all croaked if the Indians hadn't shown them how to pwn, right?

Apparently others are as excited by co-op as we are here at Co-Optimus HQ.  A couple interesting articles have popped up singing the praises of cooperative gameplay.  First up is "Why Cooperative Play Rocks" from Tom's Games.  Here's a quote the Pilgrims would appreciate:

Personally I'm overjoyed to see co-op return with a vengeance. I prefer cooperative modes to versus because it allows me to play games with my friends who don't game as much as I do. Cooperative modes allow players of varying skill levels to enjoy a game equally without fear of being utterly destroyed by a more experienced opponent or being forced to take it easy on a new player.

I'm not a new player, but I do suck, mostly, so I say, "Hear, hear!"  Another fantastic article appears over at Edge, entitled, "Why Co-Op Makes All the Difference":

(A) two-week period in November saw the release of three titles – Resistance 2, Gears Of War 2 and Left 4 Dead – that comprise the second and arguably more interesting development: the breakthroughs that game creators have made with co-op play that goes beyond adding support for more players to the story mode.

We love co-op campaigns, for sure, but it seems like developers are going above and beyond to add some unique co-op gameplay features which should increase the longevity of these titles.  This is great, and just one more thing for co-op gamers to be thankful for this year!