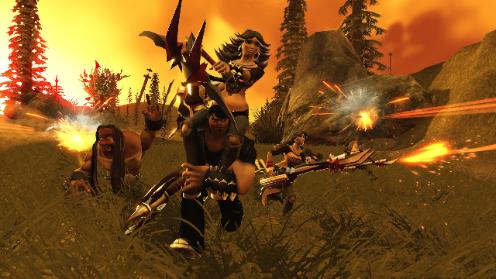 PAX 2009 was ripe with action hack and slash solo style gameplay this year, all slightly different, with a dash of original flare. I got hands on with Brütal Legend, and have to ask that important question: Why doesn't this have co-op?

As with many things with umlauts, Brütal Legend was pretty hard core. You're rocker Eddie Riggs, stuck in a "heavy metal world" full of things to be destroyed with your magic spell casting guitar, and maiming Axe aptly dubbed "The Separator." Within about 5 to 10 minutes of the demo, Eddie meets his first ally, Ophelia. Ophelia pretty much rocks at her attacks, and can be thrown at enemies by Eddie for a "fastball" attack.

This is what brought up my co-op question. There were a few times when Ophelia was speaking where it felt like a player two could have picked up that controller, and rocked out with Eddie Riggs. Eddie Riggs moved a bit slow; but not any slower than a giant rocker with an axe called "The Separator" would probably be. Ophelia could have easily been his speedier, less hard-hitting partner. Instead, she's a Fastball.

Otherwise, there was a lot of hacking, a lot of crushing, and a lot of rocking out. The guitar magic was pretty effective, and worked really well in the game. You'll also drive around in a custom hot rod smashing foes, and even completing at least one boss battle in the car.

An aspect that wasn't up for demonstration on the PAX floor was the Overlord style gameplay. Eddie Riggs is apparently able to pick up groupies/fans which he can command to do his evil bidding. This is a tactical aspect I would have enjoyed testing out, but alas was not made available.

Not to forget, Jack Black puts on an amusing performance as Eddie Riggs, which had me chuckle once or twice over the noise of PAX. I will definitely recommend picking up the demo that will be available in the next 5 days at least. Check it out and let us know if you think the same thing as I did about Ophelia (or any of Eddies other "allies") as a player 2.