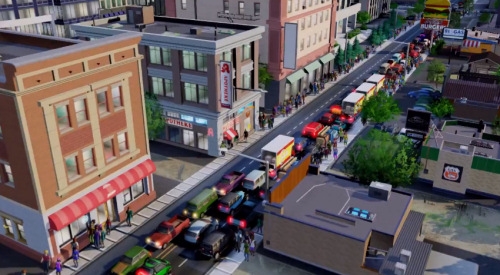 There's a new Sim City game coming next year and it's going to be bigger and more ambitious than any of the previous titles.  Among the new features will be cooperative inter-city gameplay allowing players to work together to build bigger and better cities.   The PC exclusive title expands on one of the oldest franchises in PC gaming, and from the looks of it, it's going to do it justice.

The latest video for the game features a walkthrough of starting a city in the game.  If you're a Sim City veteran there's a lot to be excited about.  There's no need to manage things like power lines, water pipes, and other annoying utilities anymore - instead the game automatically runs those infrastructure utilities along roadways now.  Players also have more direct control over roads, allowing for multiple sizes of transportation depending on the traffic.    That said you'll have new things to worry about - sewage, garbage, pollution and managing those all come into play.

Of course the most impressive feature of the game is the thousands of tiny Sim Citizens roaming around your city that you can track individually and get a beat on exactly what they want.  It reminds me a bit of Roller Coaster Tycoon, but the scale is much, much larger.

Sim City is out sometime next year and if this video is any indication - it's really shaping up to be an addictive title.