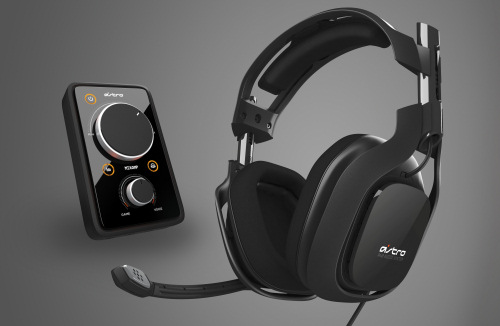 Astro have just announced a new version of their popular A40 headsets.  The 2013 refresh of the premium lineup includes a host of new features to both the headsets themselves and the mixamp.  This refresh comes a few months after Astro released their first wireless set - the Astro A50.

New Quick Disconnect Cabling System:  Updated version of the ASTRO Quick Disconnect system, offering the same flexibility of using multiple cable types and lengths, but now plugging directly into the headset via a 3.5mm 4-pole jack instead of the oiriginal mid-cable release.  This increases reliability and durability while also making it easier to change to preferred cable lengths and update cables as desired.

Best Sounding ASTRO Headsets Ever:  The 2013 Edition ASTRO A40 has re-tuned drivers and enclosures with improved low-end response and less distortion at high volumes making them the most accurate ASTRO headsets ever

The MixAmp itself is where the magic happens, this little device decodes audio signals, balances voice and in game audio, and allows you to do things like daisy chain headsets together.  It has also gotten an update for 2013 including a host of new features including some streaming friendly options.

Game and Voice Stream Output:  The ASTRO MixAmp™ Pro now features a Stream Out - a 3.5mm jack that allows Game Sound and incoming/outgoing Voice Chat to be output without interruption directly to a livestream using a single cable.

The Astro A40 Headsets with MixAmp bundle are now available from the Astro website for $249.99.  The headsets will work on computers and consoles including the Xbox 360 and PlayStation 3.