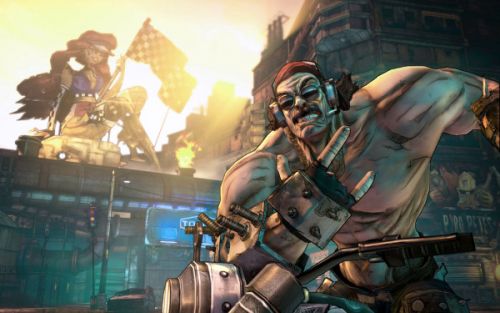 Borderlands 2's second campaign DLC, "Mr. Torgue's Campaign of Carnage," has been confirmed through a Gearbox Twitter account. The @ECHOcasts account was being used by the Mechromancer character until it was "hacked' by Mr. Torgue earlier today. After a poor choice of "explosion-based punctuation," Mr. Torgue went on to tweet:

Lovely. The picture can be seen above. God, I wish "Macho Man" Randy Savage was still alive so he could do this guy's voice.

We can also see a checkered flag (among other things), a common theme of Torgue weapons. Torgue guns are also known for their explosive ammuntion, which make them a personal favorite. The mesomorphic Mr. Torgue appears to be astride some sort of Pandoran motorcycle. I won't start the rumor of new playable motorcycle vehicle, but I won't dispel it either. (I really want a motorcycle.)

It looks like we might be racing, Vault Hunters. The Borderlands franchise isn't exactly known for its tight vehicle physics, so it should be interesting to see how it all plays out. When we get more details, like a release date, we'll be sure to let you know.

Be sure to check out our Child's Play Charity Raffle! We have some great prizes, including an Ultimate Loot Chest version of Borderlands 2, signed by the good folks at Gearbox Software! There are plenty of other games and prizes to win, as well. A $5 donation is all you need to enter to win! Do it for charity, do it for the children, do it for that sweet ass loot!