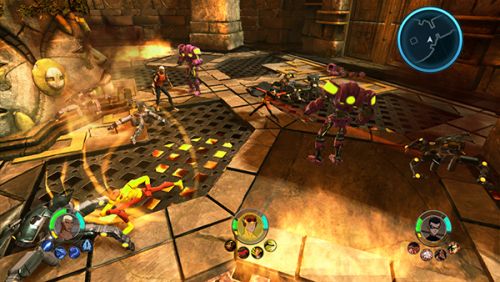 The Cartoon Network's Emmy-award winning series, Young Justice, is getting a video game. Young Justice: Legacy, which was originally announced back in April of this year and then went quiet for a time, is set in the world of the DC Universe's Earth-16 and will narratively be part of the canon of the cartoon series in addition to serving as a link between seasons one and two. While developer Little Orbit has been overly verbal about the game's features, we have managed to piece a few things together.

Relying on the latest brief teaser trailer, the game's premise, and a couple other sparse details from a few different sources, it appears the game will have co-op play with up to 3 people. I mean, just look at those screens. How could it not?! Most sources also point to the game having local and online co-op, but no word on there being combo (i.e., mixing the two) co-op available. The gameplay appears to be similar to the kind we've seen from games in the Marvel Ultimate Alliance series, which isn't a bad model to follow. Aside from that, not too much else to say. It will be downloadable title for XBLA, PSN, and PC with a supposed release date of February 2013. Hopefully we'll get some more information soon, but until then, enjoy the teaser, screens, and some of the background/story to the game.

A renowned archaeologist, Dr. Helena Sandsmark, is kidnapped, and the Young Justice team tracks a group of the Light’s most notorious villains around the globe in an effort to rescue her. But when the young heroes discover the Light is exploiting Dr. Sandsmark’s expertise to locate fragments of an ancient statue of legendary power, they must race against time to save the planet from imminent disaster.

Choose from 12 of the biggest names on The Team: