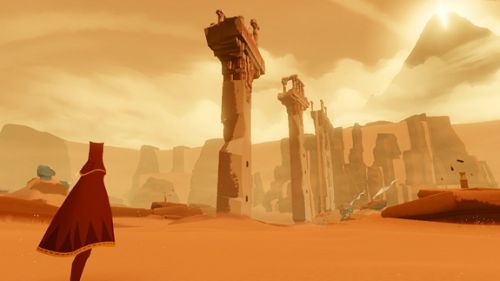 Journey has a lot of things going for it. The simple fable comes to life through a beautiful, yet sedated art style. The gameplay  is incredibly accessible while still offering players a satisfying experience. And that soundtrack, that haunting soundtrack, evokes an emotional response that brings an almost tangible weight to the story. The good folks at The Recording Academy must have enjoyed the music as well. They nominated the soundtrack for a Grammy. You might have heard about the nomination during Spike's VGAs. Like, 500 times.

Austin Wintory's music is responsible for so much of the emotional attachment I have for Journey. When I first started the game the opening song set the tone for the whole experience, and the music always felt perfect. The songs left me feeling appropriately isolated, which made the random cooperative encounters all the more amazing. Journey would not be the game that it is without his fantastic score. Have a listen:

Wintory has some stiff competition in the category. Other nominees for "Best Score Soundtrack For Visual Media" include some films and composers you may have heard of:

The Adventures Of Tintin - The Secret Of The Unicorn - John Williams

The Girl With The Dragon Tattoo - Trent Reznor and Atticus Ross

I'm shocked that I've seen all those films. I guess I'm more "with it" than I thought. Oh, and out of all those nominees, the Journey soundtrack is the only one I own. And I bought it from iTunes, using real money. So I guess I'm not that "with it," after all. The Grammys will take place on February 10th.

Journey supports two player online co-op. It is available now as a PSN download and as part of a retail compilation from developer thatgamecompany. The compilation also includes flOw and Flower, which are both worth playing. You can get the amazing Journey soundtrack from iTunes here.

For more information on Journey be sure to check out our Co-Op Review.