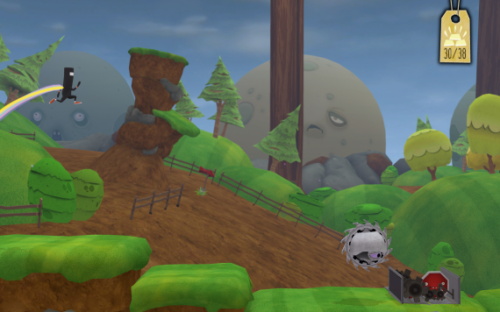 The Wii U library may be slightly limited for now, but come early into next year Nintendo will be unleashing sequel to a Wii Ware title favorite, Bit.Trip Runner! Not only is Gaijin Games bringing Commander Video back for a second helping of track-star feats, but they have added a new co-op mode in Runner2: Future Legend of Rhythm Alien that will be featured in the Wii U version!

For those that haven’t heard of the critically acclaimed Bit.Trip series, they comprise of six rhythm-based games that have the player follow along with various chiptune scores to assist in completing stages. In the fourth (and most popular) installment of the series, Bit.Trip Runner, players take command of an 8-bit, alien character by the name of Commander Video.  Trailing a pixelated rainbow behind him, players use Commander Video to run, smash, jump, slide, and dodge though obstacle filled levels of rhythm action without taking a single hit to reach the goal. In Runner2, however, Commander Video’s look has drastically changed, taking on a three dimensional look previously unheard of from his past games.

From this picture alone, you get the feeling you're not in Bit.Trip Runner anymore...

Although the Bit.Trip story has been completed, Gaijin had decided that Bit.Trip Runner hadn’t fully run its course just yet and wanted to explore its full potential more. Runner2 does take place during the Bit.Trip series, but more of a side adventure to compliment the main storyline of the series. What worked well in Runner has been transferred over to Runner 2, as well as other features will enhance the experience for both beginners and hardcore fans. The much requested addition of checkpoints will give players better satisfaction for completing segments of a course, instead of completely punishing them for a single mistake (players who hit an object previously had to restart the entire stage from the beginning). Also, the new “dance” action Commander Video can perform allows players to score extra points if the move can be safely accomplished. Unlockables, like alternate characters, skins, and levels, along with online leaderboards will give players plenty to work for instead of just completing a challenging game.

Although Runner was only a single-player game, Gaijin has opened up the floor for co-op play in Runner2. Though many specifics have yet to be revealed, it has been stated that two players (most likely local) will be able to work together to complete levels and earn the best score possible. Since both players will be playing on the same course at the exact same time, each player’s responsibility is to avoid getting hit, otherwise both players will be forced to restart the course together. In this game’s case, teamwork comes from being individually skilled enough to get the team through a level. While the game will be featured on all major platforms (PSN, XBLA, PC, Mac, Wii U), the Wii U version alone will host the co-op mode by taking advantage of the GamePad screen. This game is a few months away from release at the moment, but for those that want to get the jump on Runner2 can now pre-order the game on Steam at 10% off ($14.99 originally). Be sure to check out some awesome looking screenshots below and lookout for Runner2 hitting retail early next year, officially available on Steam come March 1st!