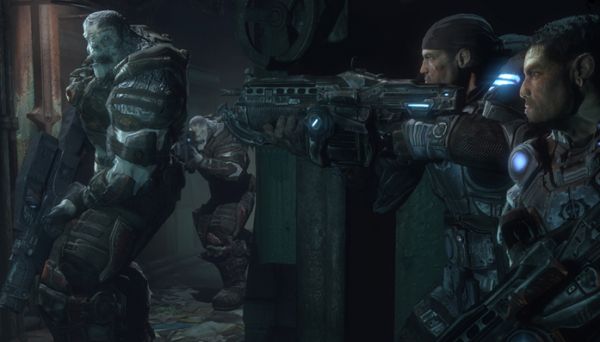 As you might be noticing, you are reading an article…by me…on a Monday. Well, today marks the debut of “Great Moments in Co-Op,” a sort of bite-sized article that will be featured every Monday. This article will not be as long as other articles, partially because like most of you, I don’t function well on Mondays. So, we have a nice little article that will make your case of the Mondays hopefully go away. Also, take note, there will be spoilers in most of these articles, but normally they are from the first half of games. So read on at your own risk.

With the upcoming Games For Windws event,  I’ve gotten into a Gears of War mode. The game was a great co-op game with plenty of memorable moments. One of these moments is getting the Junker in Act II.  At this point in the game, Marcus Fenix and his crew have fended off some serious Locusts and are now stranded with no way to deliver the resonator, an important piece of technology. Per Dom’s suggestion, the the crew heads to some friends whom Dom believes can give our heroes transportation. Sure enough, Dom’s buddy has a vehicle, but it’s way across town.  So Marcus and Dom have a mission: get the Junker, bring it back, and pick up Baird and Cole (who are staying back as collateral).

Therein is the co-op greatness of the “getting the Junker” section of Gears of War. It’s just you and a buddy, with no backup of any kind. Oh, and it’s getting dark out. And kryll are coming.  It's a section like this that makes you thank god for a co-op buddy.   You must work tightly as a team, cover each other, and communicate.  It's you two vs. the world and it's stick together or die.  The “stick together” aspect holds especially true here, with only a few (small) zones of light in which you can stand.  That light, your teammate, and your guns; are the only things keeping you alive. Between staying in the light and fending off numerous Locusts, this section of the game is a toughie; you will cherish your teammate. There are several scenes where you have to make a dash from one light to another, and the turret sections of the level are just brutal.  However you eventually get to the gas station and to sweet victory...well not quite.  There's a boomer or two in the way,  and a crazy old man who warns you about shooting the gas pumps, which, if you do are sure to mean certain death.  But hey things could be worse, you could be fighting RAAM.

So, to all of those who have played this section of Gears of War: Do you agree? Was this section a fun co-op experience for you and your buddy?   What other memorable sections are there in Gears of War?