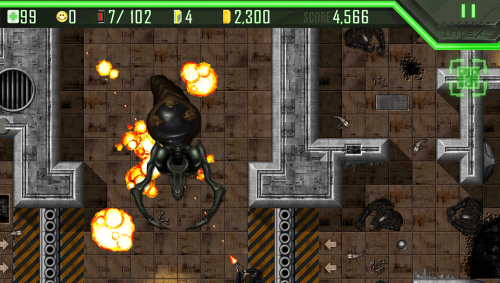 Alien Breed was remade into an episodic sequel (Alien Breed Evolution, Alien Breed 2: Assault, and Alien Breed 3: Descent) back in 2009, and were all solid co-op titles, especially for fans of the series.  Now the series is seeing another remake, though this one is base squarely on the source material and is simply called Alien Breed.  The game is coming to PSN next month and will be playable on both the PS3 and PlayStation Vita - with a bonus of cross platform co-op play and progress transfers between versions as well.

While the original 16-bit Amiga graphics will be available for fans, players can also choose the shiny coat version of the game - which should be a little easier on the eyes.  On top of enhanced visuals you'll be slaughtering aliens through 30 levels complete with full support for trophies and leaderboards.

There's no price or firm release date set, but the Alien Breed should be out in early February.  Full two player co-op support is available both locally or online and there's also cross platform play available.  This means you can play on the Vita and PS3 in couch co-op or online co-op or whatever you fancy.