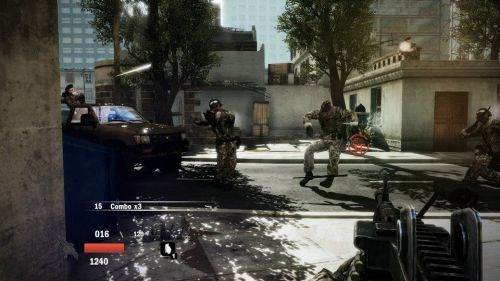 You may not have heard of Heavy Fire: Shattered Spear. You may not know about its predecessor, Heavy Fire: Afghanistan. You may be looking at the screen cap above and you may be saying to yourself, "Holy crap, this looks like another budget military first person shooter! None for me, thanks." Well, you'd be wrong. Heavy Fire: Shattered Spear is a budget military on-rails shooter. That's right. 20 bucks of mess-you-up is coming to a retailer near you sooner than you think. Of course, you probably read the headline, so you're most likely thinking "today," and you'd be right. Good for you!

According to a very ambitious press release (which you can read in its entirety courtesy of Joystiq), Heavy Fire: Shattered Spear is published by Mastiff Games and developed by Teyon. Players will be able to upgrade their skills and equipment and use a variety of weapons and vehicles. Firearms include pistols, grenades, machine guns, shotguns, and sniper rifles. There will also be helicopters, tanks, and the good ol' AC 130. You can't have yourself a proper military shooter without your own personal bullet-vomiting magic dragon. Let's have a look at that trailer.

Wow. That... was something. I just don't know if I can get into a light gun game that's not zombie-centric. If that music is playing the whole time, it might have a chance.

Heavy Fire: Shattered Spear supports four player local co-op and will be available on the PC, Xbox 360, and PlayStation 3 on January 29. The PS3 version features Move support. If you're playing on the 360 you'll move the cursor around with the thumbstick, otherwise known as the "Light Gun Control Scheme of the Damned." Heavy Fire: Shattered Spear will cost you a cool $19.99.