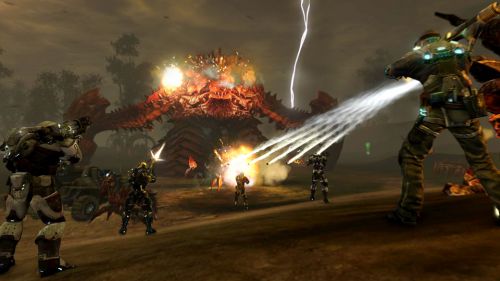 Recently I've been checking out this Defiance game, which somehow totally slipped under my co-op radar. I remember seeing the booth at a few events last year. It had a cool giant space crab rocking the Golden Gate Bridge, but something always distracted me... I honestly thought the game was called "Trion" for a while. I kind of go off to my happy place whenever people mention things like MMO, PvP, or PC gaming in general.

Silly me, Trion Worlds (Rift, Warface, End of Nations) is the publisher! Anyway, as many of you already know, Defiance is an MMO third-person shooter that ties into a TV show of the same name on the SyFy channel. It will be available on the Xbox 360, PlayStation 3, and PC on April 2nd. If you don't know anything about it, stick around, I've got some videos you may find interesting.

We've already posted a few spots depicting massive co-op scenarios, a live action trailer, and Locke's mastery of the dance-interview. Today I'll be sharing some information on the game itself, including how PvP will work around single player and cooperative play, some enemy and weapon profiles, and six minutes of actual gameplay footage. I'm going to assume the gameplay is from a PC, since we have yet to see it run on consoles.

First up, what the heck is an MMO third-person shooter?

Okay, that's cool. How will PvP work? Actually, I don't really care about PvP, because I'm way to slow for human opponents these days. How does PvP coincide with cooperative play? Can I run around the world and not get my face shot off by a 13 year old from half a mile away? It turns out I can. Like most MMOs, PvP is optional, meaning you can dive into the fight with the push of a button, or avoid it altogether.

If you decide you don't want to take on human opponents there are plenty of AI enemies to battle, including the post-apocalyptic staple bad guys, savage Mutants and outlaw Raiders. Group with some friends (or strangers) and take them down.

Grenades are always an option. They may not be a good option, but it's nice to have choices.

What's a third-person shooter without guns? Lame, that's what.  Luckily there are plenty of customizable guns in Defiance, courtesy of Von Bach Industries. Boy, they don't sound evil at all. Not one bit.

This final video features nothing but pure gameplay. Take a look and let us know what you think.

Defiance supports MMO-style online co-op. It will launch on April 2nd for the Xbox 360, PlayStation 3, and PC.