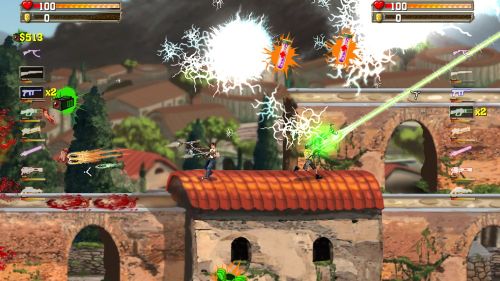 This week there's not a lot happening with co-op games. The Serious Sam franchise gets the side scrolling treatment, and the PC gets a game that came out a month ago on consoles, but that's about it. There are some big games coming out, but unfortunately for us, they neglect our favorite gaming feature.

Serious Sam Double D XXL (XBLA) This 2D side-scroller has a sweet idea called a "gun stacker." It allows players to make towering weapons of destruction. Check out our Co-Op Review. We didn't love it, we didn't hate it, but it may be a serviceable distraction during this week of slim co-op pickens.  2 player local co-op

Heavy Fire: Shattered Spear (PC) This on-rails shooter hit the 360 and PS3 a few weeks ago. It's a $20 budget title, and it shows. The Amazon description says the PC version still supports four player co-op. It may be interesting.  4 player local co-op

Below you will find the retail releases for the week, complete with Amazon links. Ah, okay. This is where the triple-A titles have been hiding. Solo players and versus fans can experience the pretty visuals of Crysis 3, and single player cyberninjas can get their slice and dice on with Metal Gear: Rising Revengeance. If we missed anything, please let us know in the comments section.