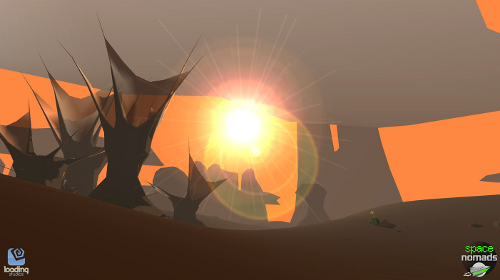 Recently unveiled by Loading Studios, Space Nomads is a sandbox-style game that makes heavy use of resource gathering, building, crafting, exploration, and ample amounts of combat. The concept is still in its early stages but already looks great, mixing elements from games like Sanctum and Minecraft and promising online co-op play for Windows, Mac and Linux users.

Stranded on an alien planet, players start with nothing more than a PodCell, a vital source of energy necessary for survival (and a rather handy crafting table). Aliens are attracted to its energy signature, so the first order of business is to set up some basic defenses to keep the cell safe. After that, it's all about harvesting resources, creating more efficient defenses (turrets, anyone?), and expanding the base one block at a time, all while keeping check on invading baddies. Players are even equipped with rudimentary weapons when things get out of hand.

Exploration is also a big part of Space Nomads. The studio plans to feature a handful of unique biomes, all of which are procedurally generated as you play, meaning no two trips for additional resources will be the same. Space Nomads is currently in early development stages and is on Steam Greenlight for voting. A public alpha is planned for this summer along with a crowdfunding initiative.