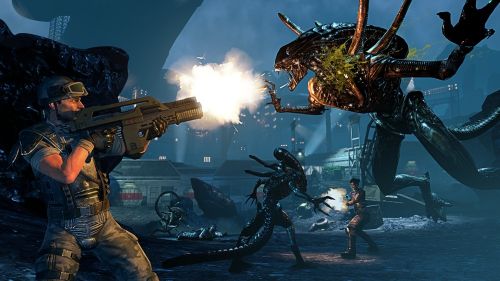 Aliens: Colonial Marines released a new objective-based cooperative mode yesterday. "Bug Hunt" is a survival mode which allows four players to team up and fight against 30 waves of xenomorphs and enemy soldiers. There are three new maps, dubbed Broadside, Mercenary, and Tribute. Players can use the money they earn from kills to capture beacon points and to buy better weapons and ammo.

The game has been an industry whipping boy since its release last month. You may be asking yourself; "Is this some sort of free offering as a reconciliatory gesture from Gearbox and Sega?" Nope. It's paid DLC. This will cost you $15 bucks, unless you splurged for the season pass. Ouch. Recent patches may make the game more tolerable, but I'll never know. I denied delivery of my copy at the door. I have plenty of games in my backlog that are actually representative of the demo versions I originally played.

Aliens: Colonial Marines supports two player local co-op on consoles and four player online co-op on both consoles and PC. It's out now on the Xbox 360, PlayStation 3 and PC. It will be coming to the Wii U eventually.