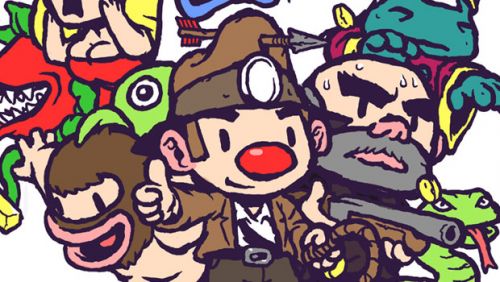 It's obvious that most video games aren’t quite as challenging these days, even at their highest difficulty setting. Certain games that make players throw their controllers out the window surely stand out from the rest, and that’s why Spelunky is such a highly addictive game. PlayStation fans will be happy to know that their versions of Spelunky will be arriving on the PlayStation Network this summer.

Spelunky has been a huge hit within the indie scene the past year or so, providing us with a ton of nostalgic gaming themes and plenty of experience in frustration. No one will deny that Spelunky’s difficulty can be quite the challenge for even a veteran gamer, but it’s quite rewarding for those who can persevere. Having up to 4 local co-op partners does make the game that much better for a party gathering, just don’t think that this will make the game any less difficult. Mossmouth's Derek Yu was happy to share the news with the world over on the PlayStation Blog:

I’m particularly thrilled for Spelunky to be coming to PS Vita. Given that runs of Spelunky generally last anywhere from a few seconds to a half an hour, I think it’s the perfect game for a portable system. We’re going to work closely with the team porting the game to make sure that it makes good use of PS Vita’s capabilities and lives up to the expectations set by that statement. For those new to Spelunky, it’s a platformer that has players descending into an underground cavern, requiring them to locate the exit in each level. Every stage is randomly generated, making both skill AND luck huge factors on the outcome of every game. However, this means that each experience is unique and anything can happen, from a super chain-reacted death to breezing past levels unscathed. Enemy locations, trap placements, treasure grabs, and storefront accessibility are always up in the air, so inventory management and platforming skills become the name of the game. Sometimes, the video game gods deal players a good hand, and sometimes they don’t. One thing is for sure: Spelunky is one game that hardly grows old.

If beating your head against a brick wall sounds satisfying enough, then Spelunky is the perfect game for any hardcore gamer. No official date has been set for these versions of Spelunky, nor has anything been stated about online co-op play. Be sure to check out our XBLA co-op review here for more info on the game.