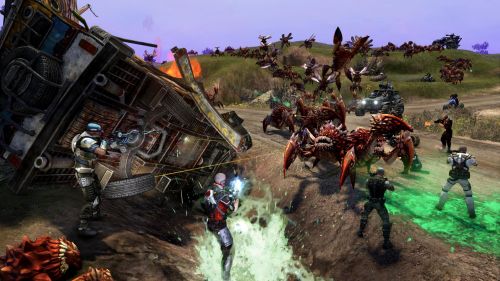 It's April 1st, so information on the internet won't be worth a damn today. You've been warned. But I assure you these games are coming out this week, unless the folks who run Amazon are being a bunch of jerks.

Defiance (360,PS3,PC) It's an MMO shooter with a lot of potential, plus it has a sweet Syfy TV series tie-in of the same name. If you'd like to know more you should check out our in-depth preview.  4 player online co-op, MMO

Ninja Gaiden 3: Razor's Edge (360,PS3)  This is Team Ninja and Tecmo Koei's do over of Ninja Gaiden 3. That particular game wasn't very well received, so they fixed some issues with, well, everything, and re-released it with the Razon's Edge sub-heading. 2 player online co-op

Here's a list of the three retail games coming to Amazon this week. Let us know if we missed anything.