Scrooged! is one of my favorite holiday movies, mainly due to the comedic genius of Bill Murray.  However, one of the best scenes in this 80s revamp of A Christmas Carol is the return of the dead boss.  Perhaps you have a family member like this.  They are so old they look decayed and wrinkled, and they smell funny.  However, they keep on coming to your holiday gatherings, year after year.  For the old creepy grandma or grandpa that just won't die, we have the perfect gift:

For Your Foul Mouthed Uncle:

There's a black sheep in every family, isn't there?  Usually it's that odd uncle that no one really likes, yet he's family and so he's always invited for the festivities.  Unfortunately, he's pretty rude, and swears like a sailor, even around the little kids.  Perhaps he even tells dirty, totally inappropriate jokes when you sit down for dinner.  Clearly, this fellow has a high tolerance for vulgar language and excessive violence that would make your poor grandma faint in shock.  The perfect co-op title for this family member:

For the Lapsed Dungeons and Dragons Nerd:

You know the type.  This is the one who's upset that they only released  Lord of the Rings movies during the holiday season three years in a row.  He walks around saying things like "By Crom!" or mumbles something about hearing the lamentation of the women.  He has a collection of quirky items like pewter dragon sculptures or full size sword replicas.  This family member has been to at least five Renaissance Faires.  The perfect gift:

You have to be careful with this one.  Remember, you're likely going to end up playing the game, right?  Better pick a good kid who you'll get along with.  The Dark Knight has been popular, due to the smash hit movie, but it's a little too dark for the real young ones.  Why not combine a kid's love for Batman with the awesomeness of LEGOs and get the coolest kid in the family this:

For the Guy with the Soul Patch

This is probably a young adult, probably early twenties.  It could be a guy or a girl, but of course only the men have the soul patch.  (Except for poor Aunt Marge.  For her, get a Gift Certificate to a laser hair removal establishment.)  This family member is beloved by all, but has gone a bit off the deep end with their independence.  They likely have several tattoos, and always wear clothes that show them off.  You know for a fact they have several piercings in unusual places, and that's just for what's visible, you don't care to speculate further.  The perfect co-op title for a playa like this:

For Anyone Obsessed with the History Channel

For the past several years, you got this person DVD box sets about all the 20th century wars.  That well has run dry, and now you want to get them a co-op game.  This person is a red-blooded American patriot, possibly having served in the military.  They have spend weekends dressed in camo and spraying deer urine on their boots while hunting, and took half a dozen guns, to be prepared for any situation.  You know they'll love this:

For the Hard Rockin' Teen

When a child turns 12, the brain drops exactly three feet, from a nice safe location in the skull to a place in the butt.  You'll find no more brain dead teenager than the one who is addicted to the Ipod.  You've seen the type, with a set of ear buds in every pocket.  You've even seem them wearing the Ipod and headphones while using the bathroom.  Ick.  The perfect game for a teen like this: 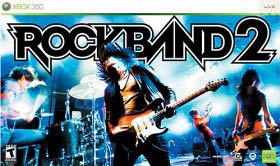 Times are rough.  Your wallet is still likely hurting from the fall onslaught of awesome new co-op titles.  Worry not, friend.  There's still some quality co-op to be had for even a low price.  Each of the following titles is a mere $20 and is easily worth that.  They may not rewrite the playbook for great co-op, but you could certainly find a whole lot worse ways to spend an afternoon.  Like decorating a fruitcake, for example.

Of course you'll need a system and accessories to play on too, right?

Remember, folks.  The holidays are all about the co-op.  Everyone has to work together to survive, right?  At least, that's how it is in my family!  Tomorrow, we'll have Billy's Holiday Gift Guide: Wii edition!