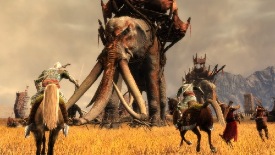 Last week, we and several other representatives from community sites were invited out to Pandemic Studios in Los Angeles to attend a Community event for Lord of the Rings: Conquest.

For those not in the know, Lord of the Rings: Conquest is a spiritual continuation of the Star Wars: Battlefront series, but with the “epic” setting cranked up as high as Pandemic could muster.  Almost all of the major battles from the books and film are included, and the developers were given artistic license to expand on some of the events that happen off-screen or were only mentioned in passing in the books.

There are two campaigns – one that follows the battle flow of the trilogy where you play as the forces of good, and an evil campaign where you play as the forces of Mordor.  The evil missions pick up at the very end of the original story and it tells a speculative tale of what would have happened had the Fellowship failed in their mission.  If you’ve ever wanted to wipe Aragorn’s smug grin off his face, or raze the Shire, this campaign’s for you!

The good news for us, dear readers, is that the campaign mode will feature two-player drop in/drop out co-op over Xbox Live (and System Link), PlayStation Network and PC! Split screen co-op is also available on the consoles, for those of you who’d rather ravage the Shire on the couch with your best buddy.  The cooperative mode (and the campaigns in general) act as a tutorial of sorts for the large scale multiplayer modes, and the ability to change classes upon respawning or reaching control points really allow you to experiment with how the different classes mesh with each other.  You’re not leashed to your partner in any way, so if you want to split up and take out multiple objectives at once, you’re welcome to do so.   Achievement and trophy junkies will be pleased to hear that there will be co-op specific awards.  The developers stressed to us that playing the campaign modes cooperatively is how they intend for players to experience them, and from our playtime, we tend to agree.

Also worthy of mention is the DS version of the game.  While it is obviously not going to be the same game as its big brothers on the consoles/PC, we have word that it will be including four-player co-op play.

If you’re familiar with the Battlefront series, you’ll have an idea of what to expect from the competitive multiplayer modes.  You have standard features like Team Deathmatch, Capture the Ring, and Conquest, where you capture and defend control points.  There are four player class archetypes on each side, and your utilization of each will be key to victory.  The Warrior is your standard melee fighter, with good defensive stats, combo-based attacks and the ability to charge into battle.  The Scout is a sneaky git who has the ability to strike at players from stealth.  Skilled players will love the ability to backstab an unsuspecting opponent for a one-hit kill.  Archers are a ranged class who play in an over-the-shoulder view with FPS-style controls and multiple arrow types to debuff opponents or hit multiple targets.  Finally, the Mage (a controversial addition, as wizards of any kind beyond the select few mentioned in the book are not considered canon) is great support class with chain lightning, fire walls and the ability to heal all units in an area of effect.