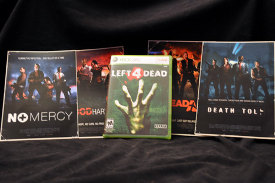 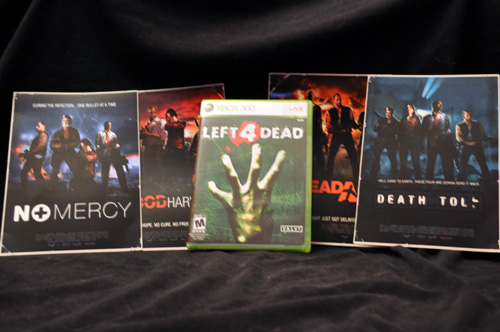 Since I entered a dimly lit room in the LA Convention Center last July during E3, and set off that infamous "car alarm" in Left 4 Dead, we've been talking up Valve's four player co-op shooter.  The sheer concept of it is simple, four people against a seemingly impossible world filled with endless zombie hordes.  We've said it before, it's something in the nature in all of us to want to live the situation.  What would you do if you were humanity's last chance?

Left 4 Dead is a game that is not only cooperative by design, but cooperative by nature.  While players are forced to work together to get out of situations like being sucked up by a smoker or pinned by a hunter;  players will find themselves working together naturally calling out exits, hordes of zombies, and survival strategies.  Keeping your teammates healed if need be is vital, there is no room for selfish acts in Left 4 Dead.  And if they do die, there's a chance to rescue them later in the level as you'll find them trapped in a closet.  There's no other way to put it, if you want to survive one of Left 4 Dead's four scenarios, teamwork is essential.

The aforementioned scenarios offer a bit of variety to the zombie apocalypse setting.  No Mercy takes you through city streets, winding you through an overrun hospital and to an epic escape on the rooftop.  Death Toll takes players underground through tunnels and forests.  Dead Air again takes you to the streets, this time culminating in an airport escape.  Finally Blood Harvest has players working through the woods, train yards and finally a corn field and farm house to survive.  Every campaign has it's own unique "highlight" moments, and no play through is the same as the previous thanks to an AI Director.

The director is responsible for placing weapons, ammo, hordes of zombies, music cues, and just about everything else in the game.  This create a certain unpredictability in the game, and just when you think you've got a level down pat, a lack of weapons and ammunition throws a wrench in your best laid plans to defeat that hunter up ahead which has now become a tank.  You'll quickly become familiar with music and sound cues, and you quickly learn to hate the cue for the tank.

If there's a downside to Left 4 Dead is that there's very little exposition, it's simply survive at all costs.  The in game characters do offer some personality, spouting off one liners from time to time, but you won't find much depth in story here.  But really, there's very little to complain about here, Left 4 Dead offers exactly what it advertises.  I'm happy to say the game has lived up to my expectations.  After almost 6 months people finally understand why I got so excited over such a little thing as a car alarm, and nothing beats that moment you hear it go off.

The Co-Op Experience: Fight with up to 4 other players against the impending zombie horde. Cover, heal, revive, and protect your teammates. Full drop in and drop out support including the ability to "pause" your character and let the AI take over. The online splitscreen mode requires a guest sign in or a gold account.